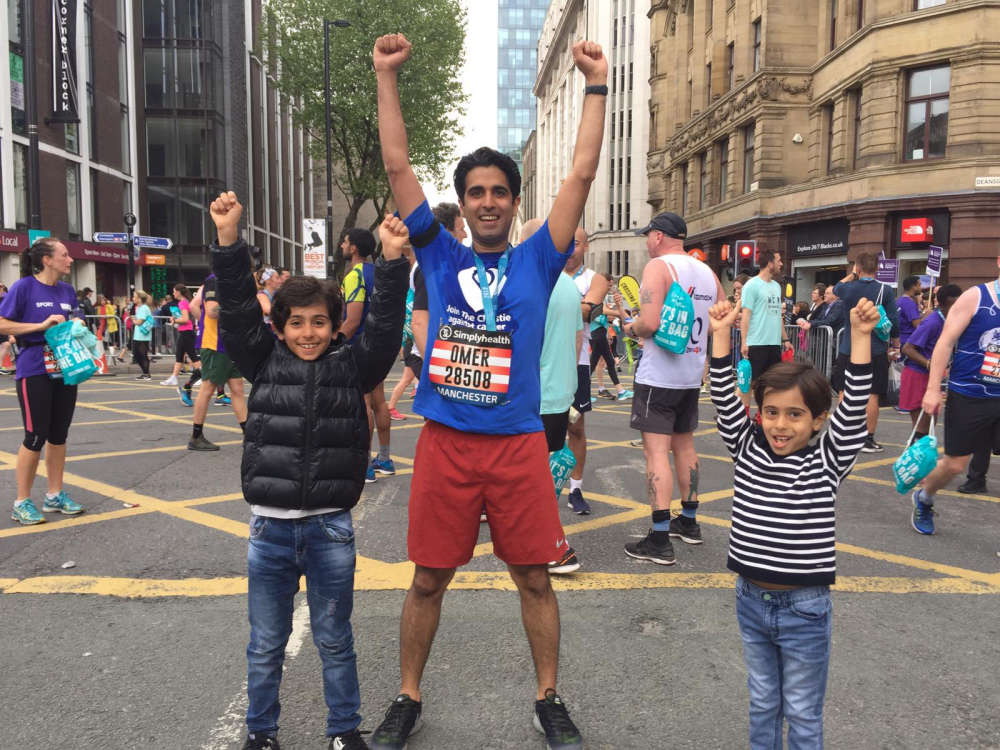 A leading cancer surgeon at Manchester’s internationally acclaimed cancer centre, The Christie, is running this year’s London Marathon on 3 October 2021.

Omer Aziz (45) from Wilmslow is a consultant colorectal and laparoscopic surgeon and has worked at The Christie since 2014, having moved to Manchester from London. He is aiming to raise more than £7,000 for The Christie charity.

He said: “I'm running for The Christie charity, as I see first hand at work every day the positive impact the charity has on the lives of my cancer patients.

“I treat colorectal patients with primary, advanced and recurrent cancer as well as some very rare tumours. Many patients come to The Christie as a last resort, and we can offer them hope and a chance to fight their disease. The Christie charity raises money for research into developing pioneering treatments, helps support individual patients, and increases awareness of new treatment options that many doctors may not be aware of.”

Several of Omer’s patients have already sponsored him for the London marathon, to show how grateful they are for the life saving surgery he has performed on them.

Neil Bridgstock (65) from Norwich was diagnosed with rectal cancer in August 2015 at Norfolk and Norwich University Hospital. He has sponsored Omer for £100. His goddaughter was working as a specialist nurse at The Christie at the time and she suggested he ask for a second opinion from The Christie.

“The moment I met Omer at our initial consultation, I was comfortable and at ease,” said Neil. “He has such a calm and assuring persona and I had my abdominoperineal resection surgery with him on 7 September 2016.

“The Christie was simply fantastic. From the ward staff to the consultant surgeons and the facilities, I have never experienced such a calming, sympathetic, and efficient organisation operating in often emotionally charged circumstances.

“Omer’s demeanour is quite remarkable. I witnessed how he managed to empathise and reassure his patients, always with this backdrop of emotional turmoil. I was really concerned that I was having major surgery taking several hours but it became so easy to deal with knowing he was at my side, before, during and post operation.

“I went skiing that Christmas thinking it might be my last but here I am five years on, and Omer still replies promptly and with humour to my emails whenever I need a bit of reassurance.

“There will be times when a cancer diagnosis will not be as kind as mine, and this is the reason I am supporting Omer. I would encourage others to do the same. Being diagnosed with cancer is a day no one predicts or wants but we need people like Omer there when and if it comes.”

Omer doesn’t describe himself as a natural runner but took it up in 2018 as part of a team of 70 Christie staff who ran in the Great Manchester Run in 2018 to help celebrate the seventieth anniversary of the NHS. “I really enjoyed running as part of The Christie 70 for 70 team and raising money for the charity I see in action every day at work”, said Omer.

“I decided to take it one step further in 2019 and run the Manchester half marathon. After that, I set my heart on the ultimate challenge of a marathon and the iconic London Marathon.

“As a child, I remember watching the runners and being in awe of them rising to the challenge. The crowds were fantastic and cheered them on. The London Marathon is recognised all over the world and having the opportunity to run it is a real privilege

“I didn’t quite realise what I signed up for until I started training so it is going to be a real challenge.”

Omer was originally meant to be running The London Marathon in 2020 and had been training for five months when the COVID-19 pandemic struck, and the event was cancelled. “I'm lucky enough to get to train for two marathons, he said. “I started training again for it in May 2021 and it’s already taken its toll on my body.”

“I enjoy the physical rewards of getting fitter and the challenge of fitting this into my otherwise busy life. Running gives me a lot of thinking time and I’ve enjoyed listening to podcasts whilst running, getting myself up to date with topics I’ve never had time to explore before. All because I spend around five hours a week running.

Omer will be cheered on by his sons Shareef (10) and Hashem (7) and his wife Serene, who is a respiratory consultant at Macclesfield District General Hospital.

In his spare time, when not running, Omer enjoys cooking and travelling – he speaks six different languages.

Omer is urging anyone who is considering running The London Marathon to sign up to run it for The Christie. “It’s a great cause and The Christie fundraising community is a real family. The Christie charity team have been fantastic. They have supported me throughout. I really feel they are behind me every step of the way”, he said.

The Christie charity supports the work of The Christie NHS Foundation Trust providing enhanced services over and above what the NHS funds. This includes money for care and treatment, research, education and extra patient services. Gifts from the public make a huge difference to the care and treatment that The Christie is able to provide to patients and their families.

The Christie NHS Foundation Trust was the first specialist trust to be rated as ‘Outstanding’ twice (in 2016 and 2018) by the health regulator the Care Quality Commission (CQC). It referred to The Christie as ‘a leader in cancer care’ and ‘a pioneer in developing innovative solutions to cancer care.’ The CQC praised the Trust’s staff which it said ‘go the extra mile to meet the needs of patients and their families’ and that they were ‘exceptionally kind and caring.’ In 2017, the CQC rated The Christie as the best specialist trust in the country, and one of the top three trusts overall in England.