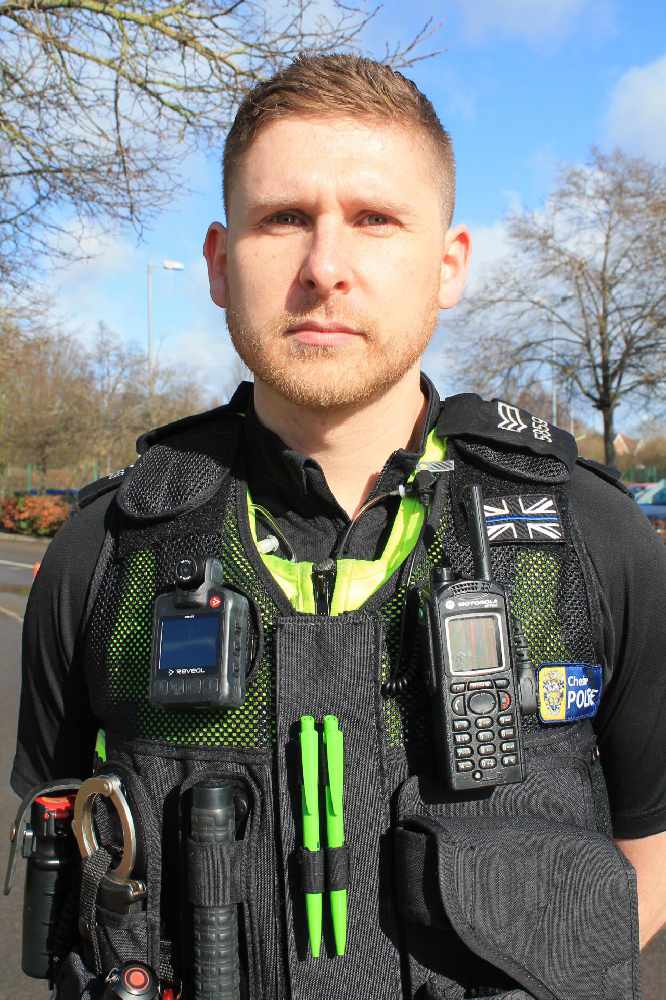 Two Cheshire Police officers who risked their safety to stop a suicidal teenager from killing himself on live railway tracks have been nominated for The National Police Bravery Awards.

Sgt Cameron Mair and PC Jarrad Sainsbury will now join more than 90 colleagues from across England and Wales nominated for their courageous acts at the prestigious Awards Event in London.

It was back in November 2019 when the pair responded to a call from the 17-year-old’s distraught parents on who said he had left a suicide note at home.

They told the Macclesfield-based officers their son was autistic and was having some issues at his school, which might have explained his state of mind.

Using the ‘find my iPhone’ app, the officers tracked the youngster to the train line near Abbey Road in Macclesfield and multiple teams were dispatched to try and find him.

It was peak commuter time, and Network Rail had been unable to put a stop on the line, meaning he was in extreme danger.

Just after 6pm air support found him on an embankment and radioed to officers that he had got onto the tracks.

Sgt Mair and PC Sainsbury, directed by the National Police Air Service, managed to get through some undergrowth to get to him and to try and talk him out of what he clearly intended to do.

Sgt Mair could see the youngster sitting on the tracks, but he was wearing headphones, making it impossible for the officers to communicate with him. Knowing there was no stop on the line and that fast-moving commuter trains were due any minute, Sgt Mair made the split-second decision to try and get him off the tracks.

As he did so, the young man resisted, so PC Sainsbury joined his colleague to try and get him to safety.

Between them, they managed to get the teenager off the dangerous tracks and to the embankment. In the struggle, they could see he had a knife tucked into his trouser waistband.

The officers then escorted the boy back to his parents before he got the urgent medical attention he needed.

Sgt Mair said: “As we approached through the woodland, [the youngster] had actually moved from the side of the tracks onto the tracks itself. And as we’ve got sight of him he’s sat cross-legged on the tracks with his headphones in, eyes closed, crying.

“We had to decide to go onto the tracks and remove him. Unfortunately, when we did, he gave us a bit of resistance due to his distressed state, which proved a bit difficult trying to get him off the tracks in time before the train came. But obviously, we managed to do that and managed to get him to hospital.

“As a supervisor, from the moment we set off from station to the train tracks, PC Sainsbury is my welfare priority as well as the young lad. That’s from day one. That’s part of my role.

PC Sainsbury said he was proud of what he and his Sergeant did that day.

“I think when I reflect on it a bit more, I think I’ll realise what I’ve done,” he said. “I just remember I jumped in the car with Sarge and off we went, as we do every day. You just act on impulse and just do what you think is right. That’s part of the job.

“At the end of the day, we got the result that we wanted. The young lad is alright and is hopefully now getting the treatment and support he needs.

“I was on honeymoon when I heard we’d been nominated; I thought they were pulling my leg.”

Cheshire Police Federation Chairman Jamie Thompson said the officers’ actions had quite simply saved the young man’s life and got him access to the support he needed.

“This was a challenging rescue from live train tracks with trains approaching,” he said. “What a fantastic effort firstly to find and get to the teenager and then to mitigate for his autism and state of mind to get him off the tracks and to safety.

“His parents were distraught so to see him back with them, getting the help he needs and our officers back with us safely is a fantastic result; it’s all down to Sgt Mair and PC Sainsbury’s professionalism and selflessness.

“Our thanks go to both of them – and they are a very worthy nomination.”

The National Police Bravery Awards honour officers from across England and Wales who have performed outstanding acts of bravery while on or off duty.

As nominees, Sgt Mair and PC Sainsbury will attend a prestigious daytime reception and evening awards ceremony in London in July 2021. The 2020 event – the 25th National Police Bravery Awards - had been scheduled to take place this past summer but had to be cancelled due to Coronavirus.

Nevertheless the Police Federation of England and Wales wanted to take the opportunity to highlight the fantastic work of all 94 nominees from across the country online from today (September 24).

John Apter, National Chair of the Police Federation of England and Wales, said: “We are incredibly proud of all the nominees from across England and Wales. The actions of these courageous officers provide a small snapshot of the amazing work our colleagues carry out day in and day out.

“Sgt Mair and PC Sainsbury proved once again how police officers are much more than crime fighters. What brilliant police work. We are very proud of them.

“As a Police Federation, we wanted to make sure these brave officers received the recognition they deserve in the year their actions were meant to be celebrated. And we look forward to seeing them all in person – and revealing regional and national winners - when the time is right in 2021.”

The National Police Bravery Awards are sponsored by Police Mutual.

John Perks, Chief Executive Officer of Police Mutual, said: “Police Mutual is, as always, proud to be supporting the National Police Bravery Awards in its 25th anniversary year. Despite having to postpone the original ceremony, the officers’ courage has never been forgotten – they all showed commitment to keeping the public safe in the most demanding of circumstances.

“We very much look forward to meeting all the nominated officers in July 2021 for the ceremony, and our chance to give our thanks in person.”