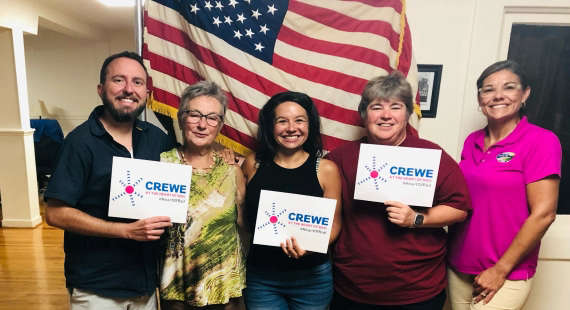 The Mayor of Crewe, Virginia has written to Secretary of State for Transport, Grant Shapps MP, declaring the US town’s support for its UK namesake’s bid to host the national headquarters of Great British Railways.

Crewe, Cheshire, is one of six shortlisted locations vying to host the new headquarters and has a strong connection to the railway, as a town that grew out of the railways and maintains strong links to this day.

Crewe, Virginia, which has a population of around 2,500 residents, was founded in 1888 and is also a historic railway town. It was named after and in honour of its Cheshire counterpart.

In his letter to the Transport Secretary, Mayor Phil Miskovic highlights the strong railway heritage that the two towns share; their longstanding special relationship; and the inspiration that Crewe, Cheshire, continues to provide to its namesake.

Crewe, Virginia’s town council has also issued a resolution of support for the bid, recognising the important role that the rail industry has to play in both communities.

Councillor Sam Corcoran, leader of Cheshire East Council, said: “We would like to say a huge thank you to Mayor Phil Miskovic and the wonderful people of Crewe, Virginia for supporting our bid to host the new GBR HQ.

“This international endorsement really highlights the impact that Crewe has had and continues to have on the rail industry and is a strong boost to our bid.

"Our towns share a really positive long-term relationship, and rail is at the very heart of both of our communities.”

Mayor of Crewe, Virginia, Phil Miskovic, said: “We are extremely proud to support Crewe’s bid to become the new home of Great British Railways, which would provide the town with the opportunity to continue its great rail legacy.

“Our towns share a common railway heritage which our respective communities have worked hard with strength and vision to create, and we are inspired by Crewe’s bid for this honour. I can’t think of a more deserving place for the HQ to be established.
We’ve shown our support and I’d urge everyone to join us by making sure they vote Crewe!”

Simon Yates, from Crewe Town Board, recently visited Crewe, Virginia, and reached out to the namesake town for support. While on the trip, former Mayor of Crewe Diana Yates exchanged gifts between the two Mayor’s to celebrate the links between the two rail towns.

Simon Yates, said: “I was fortunate enough recently while on a trip to America to get the chance to visit Crewe, Virginia and continue to grow the relationship between the two towns.

“It’s fantastic that they have now backed our bid and helped showcase Crewe’s credentials for Great British Railways across the Atlantic. I’d like to extend a warm thanks to all the ‘Crewetons’ for their support.”

To get involved in backing Crewe’s bid, pledge your support on social media by using #HeartofRail or visit:

The public vote runs until 15 August 2022 and a final decision is due later this year.