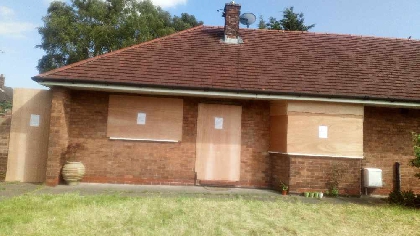 Police have closed down a bungalow that has blighted a community in Cheshire with persistent anti-social behaviour.

On Friday 5 July officers from Northwich Local Policing Unit (LPU) secured a closure order for a bungalow on Malpas Road in the village of Rudheath.

They applied for the order, which was granted by Crewe Magistrates’ Court under the Anti-Social Behaviour, Crime and Policing Act 2014, after gathering a catalogue of evidence in relation to numerous anti-social behaviour issues connected to the property.

Following the hearing the tenant, a 34-year-old man, has been removed from the address and the bungalow has been boarded up for a period of up to three months.

Anyone who enters the property during that time is committing an offence and can be arrested and prosecuted.

Sergeant Gary Weaver, of Northwich LPU, said: “Over recent months there have been numerous instances of anti-social behaviour connected to the property on Malpas Road in Rudheath.

“People were coming and going at all hours and neighbours were also subjected to excessive noise as a result of domestic disputes at the property.

“The behaviour of the tenant and his visitors was totally unacceptable and was having a significant detrimental impact on the quality of life of local residents.

“We want people to be able to live in their homes without having to endure this sort of behaviour and the closure order is another example of our commitment to targeting those who undermine our communities and bring misery to others.

“I am happy to say that we have had feedback indicating that the area has improved significantly since the closure order was granted.

“At Northwich LPU we will continue to tackle those who engage in anti-social or criminal activity at their own home. Those who do so risk losing the property.”

Officers will conduct regular checks of the bungalow over the next three months to ensure that the closure order is not breached.

If anyone is found to have breached the order they are liable to be arrested and face up to six months in prison, a £5,000 fine or both.