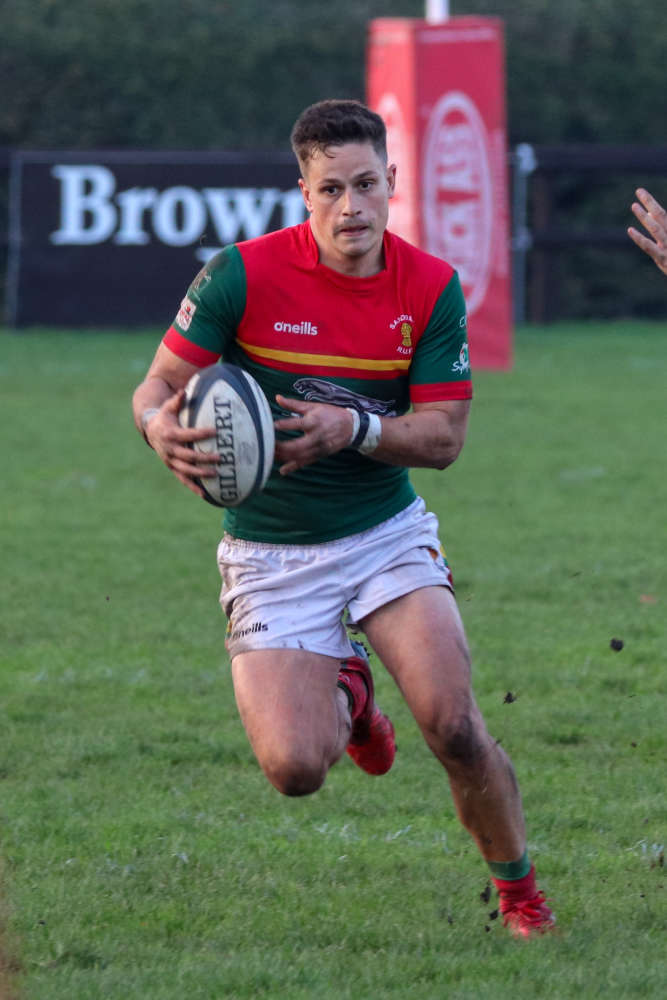 It was a professional performance by the Bach on Saturday, when they travelled to Burnage’s Varley Park, leaving with maximum points in a dominant display across all areas of the game.

The home outfit did not make it easy and put in a dogged effort and with Sandbach also having to contend with a couple of key injuries on an unfamiliar synthetic pitch, it was all the more impressive. The key to Sandbach’s performance lay in the set piece, that was effective all afternoon and with Burnage particularly under pressure at scrummage time, it was always going to be a struggle for them and so it proved. James Preston grabbed the headlines with a twenty-point haul, further helping his cause as the current league’s top point scorer.

Evidence of Sandbach’s forward supremacy was quickly on view, as they won an early scrummage penalty and a spectacular kick to the corner by Tom Morton, setting up the opening try after five minutes. Hooker Matt Beeston in for the injured Alex Bishop steering the lineout catch and drive expertly over to score. Morton then slotted the conversion. The home team showed they could be dangerous when they had the ball, as Sandbach slipped off a tackle on Burnage’s fly half Grant Connan, supporting wing forward Keir Merrick showed impressive pace, to sprint forty metres in to score and reduce the deficit. Sandbach quickly recovered as another driving lineout was held up. They went round the corner and second row Callum Oakden forced his way over. Morton again adding the extras.

Morton left the field soon after with a hamstring injury, the experienced Jimmy Reilly filling in for him. Sandbach then had a further blow with skipper Jimmy Gore leaving the field having damaged his ankle on the unforgiving surface, resulting in a significant reshuffle of the back division and replacement flanker James Finucane finding himself out on the wing. Sandbach regrouped and stretched their lead with a James Preston penalty after thirty minutes and really should have scored at the end of the half. Crucially a knock on occurred as the Burnage scrum was being shunted over the line to complete the first half action.

Five points to seventeen up at the break, the next ten minutes were always going to be crucial, so when Burnage’s Watkins was shown a yellow card for a high tackle, that made it difficult for them. Preston added his second penalty five minutes later and while the centre was still off the park Sandbach increased their lead, as their dominant scrum paid dividends with No. 8 Josh Brookes touching down. Preston adding the conversion. Back to a full complement made no difference though when from a well worked set play, deft hands from prop John Whittaker sent Sandbach’s Jack Leech speeding through to score and Preston once more did the honours.

Preston then scored an outstanding individual try, bursting clear in his own half his outside arc and pace was enough to see him sprint away and dive in at the corner. The fullback now operating at centre showing his all-round footballing skills by slotting the difficult conversion. With five minutes to go Sandbach were penalised for accidental offside, and a quick tap and favourable bounce off the plastic surface, saw Burnage grab a consolation score through replacement wing Oliver Fallon. Sandbach had the final say however, as Preston booted over a simple penalty from in front off the sticks to end the game and record a well-deserved win.

This was a solid performance from the Bach which will have pleased them, the only downside being the injuries picked up in the game. The fixture concluding the first half of the league campaign and sees Sandbach remain in fourth place in the league, after just three defeats. They will perhaps be ruing the loss to neighbours Northwich, but otherwise the league reflects the current status of the teams involved. Nevertheless the second half of the season looks a little trickier, with a lot more away games than home, which includes visits to the top three teams. Sandbach will look forward to the challenge and with four wins recorded for the various senior teams at the weekend, should have a degree of confidence. That is, as long as they can keep the majority of their players fit.