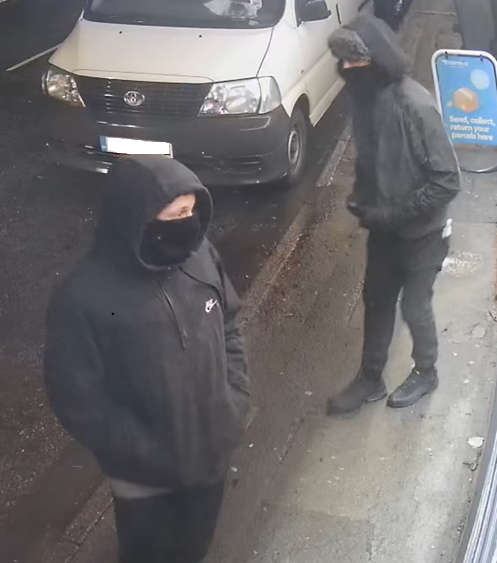 Detectives investigating an armed robbery, at a convenience store in Congleton, have released a CCTV image of two men they are looking to trace.

At around 6pm on Monday 29 November an unknown man armed with a knife entered the Select Convenience Store on Brook Street, while a second man stood in the doorway.

The man armed with the knife then threatened staff and ordered them to open the till before stealing a quantity of cash.

Both men then left the store on foot, travelling in the direction of Congleton Park.

Enquiries in relation to the incident are ongoing and detectives believe that the men in the CCTV image may have important information and are urging anyone who recognises them to get in touch.

Detective Constable Thomas Towe said: “This incident has understandably left the store worker shaken and is likely to cause concern in the local area.

“I would reassure residents that we are committed to doing all that we can to identify the people responsible.

“We’re currently following a number of lines of enquiry and as part of our ongoing investigation we have released CCTV images of two men we are keen to speak to.

“We would also like to hear from anyone who was in the area at the time of the incident and believes they may have witnessed the offenders entering or fleeing the store.

“The same goes for anyone with any CCTV or dashcam footage that may be relevant to our investigation.

“Alternatively, information can be reported anonymously, via Crimestoppers, on 0800 555 111.”