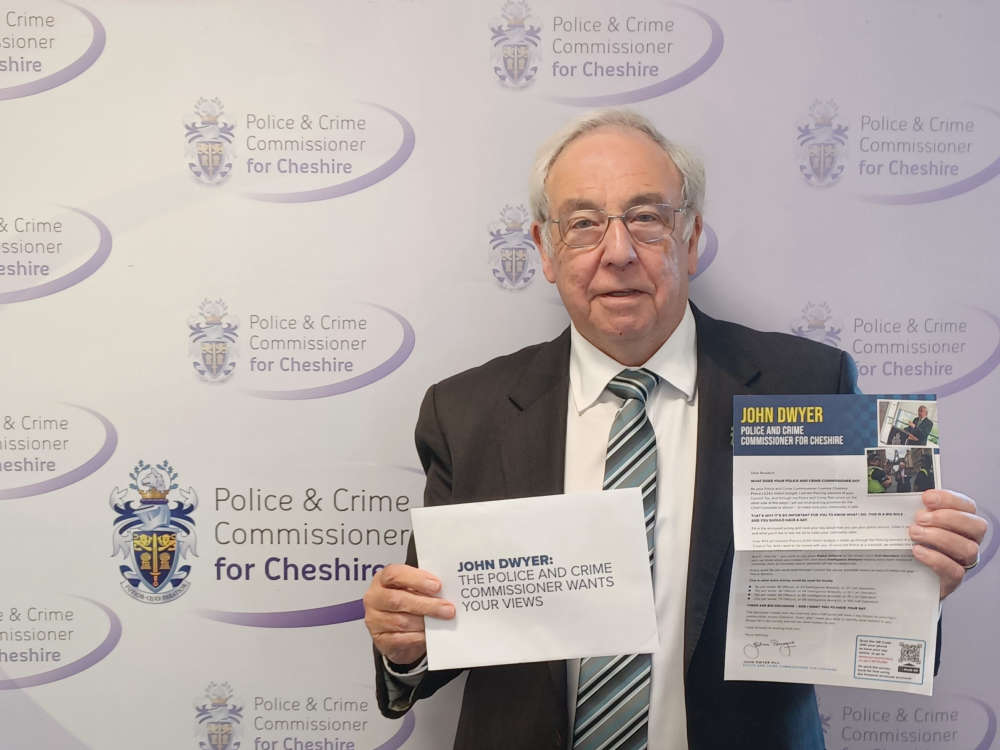 Police and Crime Commissioner for Cheshire, John Dwyer, is thanking people who have shared their views with him in his Autumn Survey and is encouraging those who haven’t yet had their say to take part before the 5th December deadline.

Two weeks ago, the Commissioner’s survey began to land on doormats across the county. It is designed to get the broadest possible picture of what people are feeling about policing and crime across Cheshire and contains sections about crime in communities, people’s experience with the police, the police budget, and the overall opinion of the police service.

The survey can be returned via the freepost envelope that was delivered with it or completed online at www.surveymonkey.co.uk/r/5P75ZBS

John Dwyer, Police and Crime Commissioner for Cheshire, said: “I’m incredibly grateful to the many people who have already shared their views with me. I want to hear the biggest possible range of opinions and experiences from people across the county so I can hold the Chief Constable to account on your behalf.

“If you haven’t had your say yet then I encourage you to go online or get in touch if you’d like a paper copy. The more I know about what’s going on in your community the better I’ll be able to ensure the police service you receive is as effective as it can be.”

In his letter that was delivered along with the survey, the Commissioner outlines the commitment he shares with Chief Constable Mark Roberts to take Cheshire’s police officer numbers to the highest level in modern times – 2,345.

As well as setting out these ambitious aims and the public’s priorities for the Chief Constable to deliver in the Police and Crime Plan, a key responsibility of the Commissioner is to provide the Chief with the resources to achieve this.

This includes determining the police precept - the part of council tax that goes to the police - and in his survey the Commissioner outlines a number of options for people to consider.

John Dwyer added: “Getting people’s views on the police precept is important because it allows me to understand what resources they feel are necessary to deliver on the issues they feed back to me via the survey, as well as the priorities already set out in the Police and Crime Plan.

“I’ll be coming back to the public with a formal proposal for the precept that will reflect what they tell me in this survey. That’s why it’s so important to have your say before 5 December.”

To take the Commissioner’s survey online, go to:

To request a hard copy of the survey, please email:

Pictured - John Dwyer, Police and Crime Commissioner for Cheshire with his Autumn Survey.