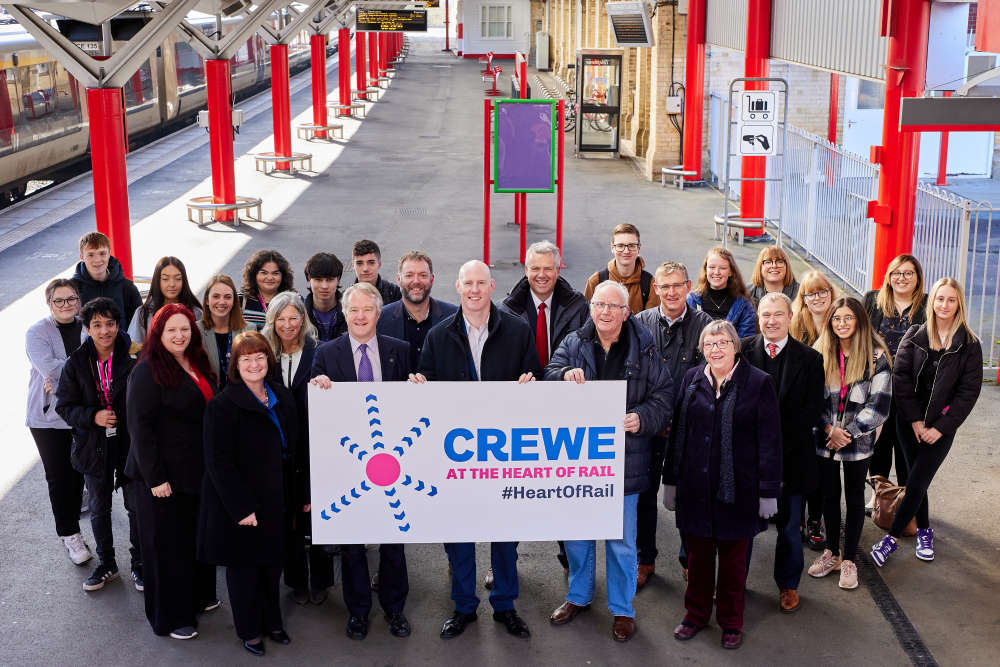 Residents, businesses, stakeholders and supporters from across the country have been thanked for their support in getting behind Crewe’s Great British Railways bid during the public vote.

The vote for where the GBR HQ should be located closed on Monday. The vote was intended to show the level of support for each of the six shortlisted places and will be considered as part of the final decision making.

Alongside Crewe, Birmingham, Derby, Doncaster, Newcastle and York were also shortlisted – after 42 towns and cities across the country applied.

Great British Railways is the public body that will run the railways from 2023.

The people of Crewe – as well as from across Cheshire East, the wider region and the country as a whole – are now being thanked for their fantastic support during the voting.

Councillor Sam Corcoran, leader of Cheshire East Council, said: “It’s never been in doubt that rail is at the heart of Crewe but over the last couple of months we have certainly proven it. Everyone you speak to has voted for Crewe and more so, our residents have been our best asset in making sure other people have as well.

“Seeing so many people excited about rail, our heritage and also the opportunities for our future has been a real breath of fresh air. No matter what the result, I hope this can be the start of something special, as we continue to shout about everything Crewe has to offer.

“To everyone that has voted, I want to extend a huge thank you – you really have done Crewe proud.”

Cllr Craig Browne, deputy leader of Cheshire East Council, said: “It’s been a whirlwind few weeks as we’ve looked to rack up as many votes as possible for Crewe, and also hosted our ministerial visit. We couldn’t have achieved all we have without the help of our community, businesses and stakeholders.

“The likes of the football club and its supporters, Crewe Town Council, Pete Waterman, The Market Hall, Freightliner, Locomotive Services, the Heritage Centre and Avanti, South Cheshire Chamber of Commerce, Cheshire and Warrington LEP and many more have all been vital to this process, and I’d like to extend my thanks to them.

“While the public vote has now closed, our work does not stop here as we will continue to push the case for Crewe to the Government and show why we are the best choice for GBR.”

Dr Kieran Mullan, MP for Crewe and Nantwich, said: “Thank you to everyone who has got behind the bid and cast their vote.

“We’re determined to bring opportunities to Crewe that will help level up the town and Great British Railways would certainly do that. There is so much here already in terms of rail expertise and infrastructure that GBR would be able to collaborate and thrive if it came to Crewe.

“I look forward to hearing the result later this year.”

The Secretary of State for Transport is expected to make a public announcement regarding the selected location later this year.

As well as the result of the public vote, the Secretary of State will take the selection criteria and the understanding gained from the ministerial visits into account.

For more information about Crewe’s bid go to: