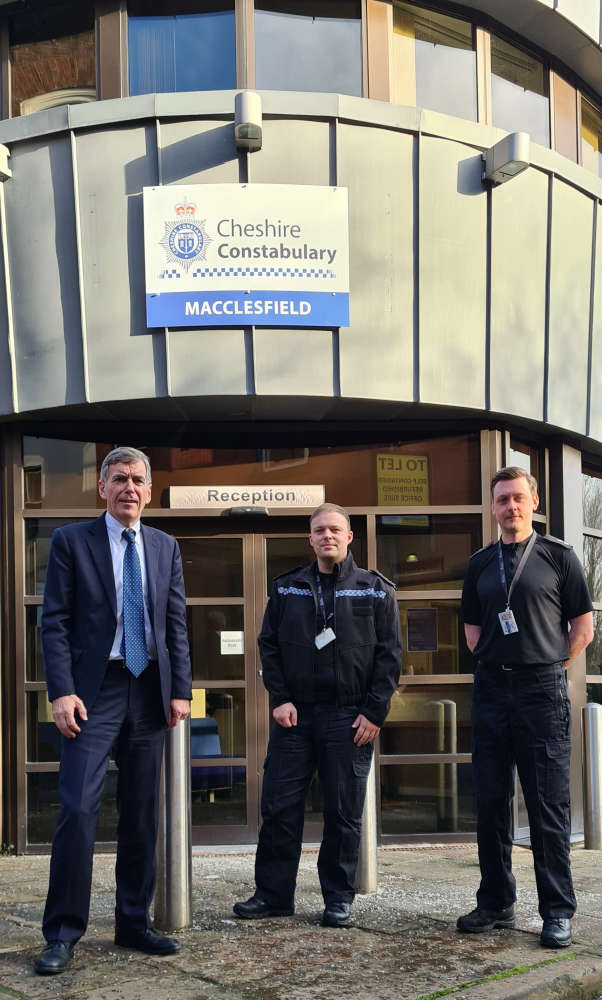 The meeting was also attended by Gareth Beasley, Inspector for the Macclesfield Local Policing Unit.

At the top of the agenda was the work of police in tackling domestic violence and violence against women and girls across the county – a major and ongoing focus for Cheshire Constabulary. Chief Inspector Lagar confirmed that his team are using every tool at their disposal to tackle these appalling crimes and prosecute them to the full extent of the law. That includes by issuing Domestic Violence Protection Notices. These powers give the police immediate authority to stop an offender harassing their victim, and the victim the breathing space they need to get to a place of safety, assess their options, and be put in touch with vital support services.

Whilst these powers are proving effective, Chief Inspector Lagar was clear that the main focus of local police is on early intervention, to try to stop these crimes from happening in the first place. That is why Cheshire Constabulary is promoting ‘Clare’s Law’, which allows women who are victims or potential victims of domestic abuse to ask the police to disclose information about their partner’s or ex-partner’s previous abuse or violent offending. The police are also highlighting the ‘Open the Door’ initiative which is a Cheshire wide campaign aimed at supporting people to help themselves and one another with tips, advice, information and stories to build up knowledge and confidence to recognise the signs of abuse and start a conversation that leads to early support.

David’s wide-ranging meeting also focussed on other important issues that matter to local residents. These include the ongoing work of local police to tackle exploitative and destructive county lines crimes, where positive progress is being made to disrupt the harmful activities of drug dealing networks in larger towns and cities across the North West. David also raised the continued need to reduce anti-social behaviour, and address crimes that take place in local rural communities, particularly those targeted against farmers, as well as the problems posed by fly-tipping.

Speaking after the meeting, David said, “Chief Inspector Lagar was clear in his commitment to keeping local residents safe, not least through a strong focus on tackling domestic violence and violence against women and girls. These appalling crimes cause women to live in fear in their own homes, subject to intimidation, coercion and physical violence. I am encouraged that the police are giving these issues such close attention, as well as other key priorities for our area. I know local residents continue to give our police officers their strong support, and I look forward to working closely with our new Chief Inspector and his team over the year ahead.”