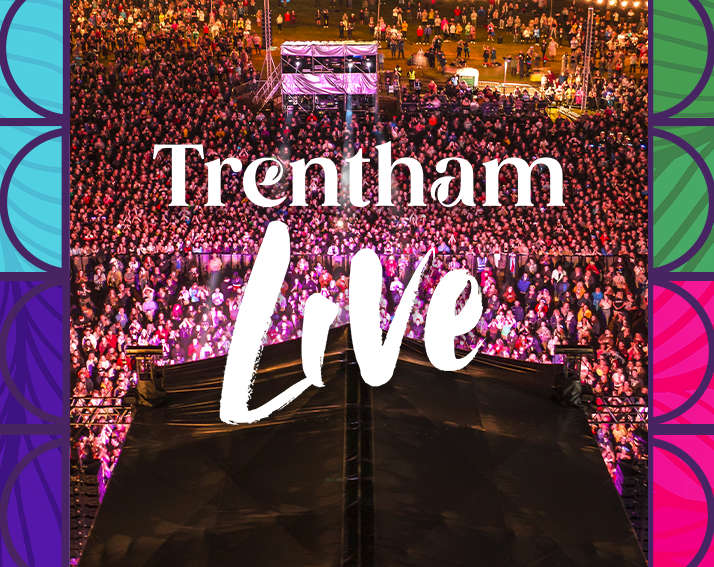 Trentham has announced the second of the headline acts for next year’s Trentham Live 2023, KAISER CHIEFS will be performing at The Trentham Estate on Saturday 19th August.

Kerrie Pope, Head of Events at Trentham said, “Following on from Olly’s announcement last week, we’re really excited about 2023! It’s an incredible line up now with two fantastic headline acts! We know that people will really enjoy an exciting weekend of live music, fun and feasting in our unique historic setting.  We are delighted to have Kaiser Chiefs on board to bring a superb Saturday to the festival”.
Senior Director Alastair Budd added, “ As Visit England’s 5th most visited visitor attraction, Trentham is a must-see venue, not only in Staffordshire and the Midlands, but nationally as well! We can’t wait to welcome thousands more visitors back again in 2023 and what a line up it’s turning out to be with Kaiser Chiefs now added to the bill!”
KAISER CHIEFS
Founded by secondary school friends and fervent Leeds United supporters, West Yorkshire quintet Kaiser Chiefs took their name from the South African football club of the same name, formerly home to Leeds hero Lucas Radebe.
Inspired by new wave, pop-rock and punk, the five-piece broke onto the music scene in 2005 with their debut Employment, produced by Stephen Street (The Smiths, Blur). Not only did the studio album spawn the ubiquitous hit I Predict A Riot, it also helped Kaiser Chiefs score three BRIT Awards and get shortlisted for a Mercury Prize.
Their 2007 follow-up Yours Truly, Angry Mob reached No.1 on the UK albums chart, its lead track Ruby becoming the band’s first No.1 single.
Of Kaiser Chiefs’ next four albums, 2008’s Off With Their Heads, 2011’s The Future Is Medieval and 2016’s Stay Together broke into the top 10, while 2014’s Education, Education, Education & War went all the way to the No.1 spot. The hits also continued to flow, including Oh My God, Everyday I Love You Less And Less, Modern Way, Everything Is Average Nowadays, The Angry Mob and Coming Home.
Alongside tours supporting their albums and countless festival appearances, the band appeared at the London 2012 closing ceremony, playing Pinball Wizard by The Who. Vocalist Ricky Wilson also became a familiar fac, appearing as a coach on the BBC series The Voice from 2014 to 2016.
In 2019, Kaiser Chiefs released their seventh LP Duck, produced by Ben H Allen (Gnarls Barkley, Animal Collective). The band promoted the album with a special concert at Elland Road commemorating 100 years of Leeds United FC.
November 2022 saw them complete their Arena tour alongside The Fratellis and The Sherlocks.
For more information on the Kaiser Chiefs and tickets on Trentham Live 2023, please go to:
www.ticketmaster.co.uk/trentham-live
For more information on the Kaiser Chiefs, please go to:
Website – http://kaiserchiefs.com/
Facebook – https://www.facebook.com/kaiserchiefs/
Twitter – https://twitter.com/KaiserChiefs
Instagram – https://www.instagram.com/kaiserchiefs/?hl=en
You Tube Channel - https://www.youtube.com/channel/UCnFROBOMsmkb_-3B7lPH_Ag