Mum of three killed while cycling in Crewe prompts charity Crimestoppers to offer £10,000 for information 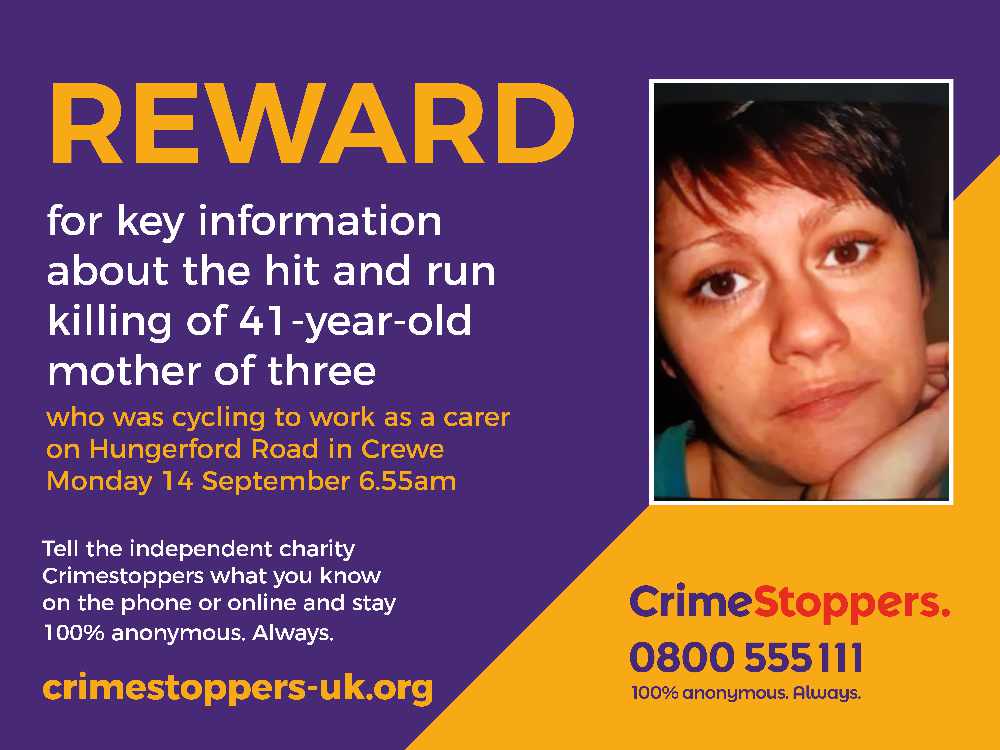 The independent charity Crimestoppers has today launched an appeal for anonymous information and is offering a reward of up to £10,000 over a fatal hit and run involving a cyclist in Crewe.

The fatal collision happened on Monday 14 September 2020 and was followed by another incident involving another cyclist a short time later.

41-year-old Agnieszka Pocztowska was cycling to start her vital work as a carer in the community at around 6.55am when a silver-coloured Ford Focus collided with her on Hungerford Road in Crewe. The car sustained serious damage to the windscreen and the driver drove off from the scene. A short time later, the car hit another cyclist on the Crewe Road, near Cartwright Street, causing injuries to a male cyclist.

The car then left in the direction of the M6 and was found 30 minutes later at the junction of the Lymevale Road and Brookfield Road in Trent Vale, Staffordshire.

***To support officers with their investigations, Crimestoppers is offering a reward of up to £10,000 for information the charity exclusively receives – either online at Crimestoppers-uk.org or by calling freephone 0800 555 111 - that leads to the arrest and conviction of those responsible for these hit-and-run incidents***

Gary Murray, Regional Manager for the North West at the charity Crimestoppers, said:

“This is a particularly heart-breaking case where a mother of three children on her way to work has been killed, and the driver and passenger in the vehicle have fled the scene and then hit another cyclist, causing him injuries a short time later. Those who knew Agnieszka describe her as being a beautiful, caring and compassionate person who loved her job and her family.

“You can tell our charity what you know 100% anonymously. Always. Please call our UK Contact Centre, which is open 24/7, on freephone number 0800 555 111 or you can use our simple and secure anonymous online form at  www.crimestoppers-uk.org. Our charity has been taking crime information since we began supporting the public to speak up anonymously over 32 years ago. Every day over a thousand people trust our charity with their crime information. Nobody will know you contacted us, only you and you’ll be doing the right thing for Agnieszka, her family and colleagues, and helping to protect the wider community.”

Please note: Computer IP addresses are never traced and no-one will ever know you contacted us. For telephone calls, we have no caller line display, no 1471 facility and have never traced a call.