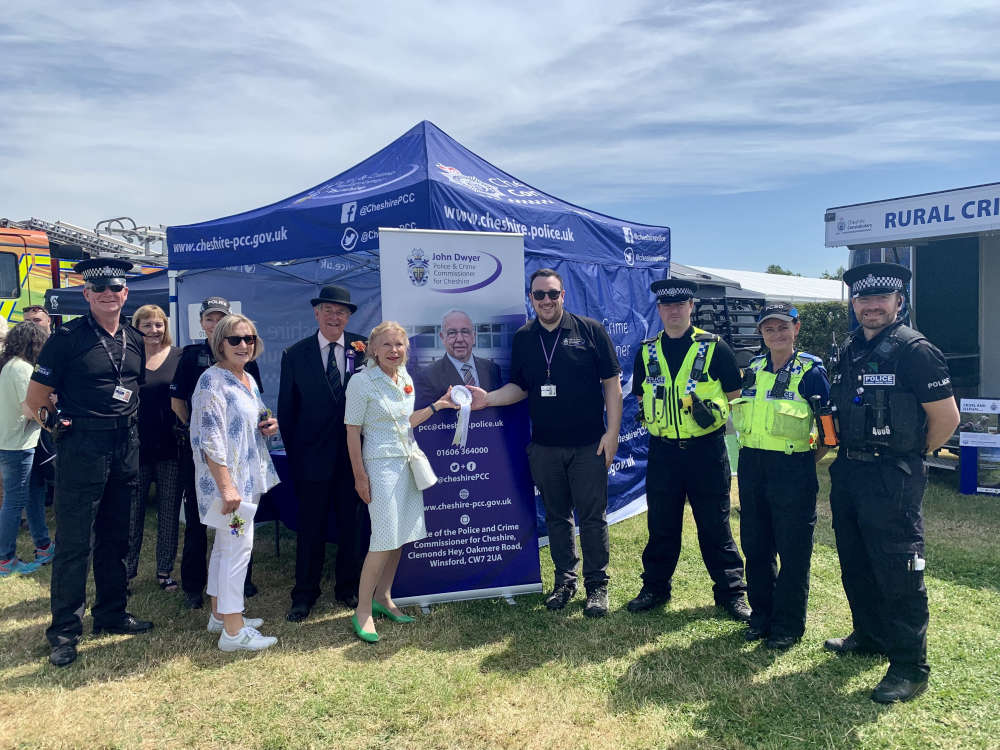 The main police stand secured the runner up rosette for Best Trade Stand at this year’s show.

The Office of Police and Crime Commissioner for Cheshire, John Dwyer, was joined by Cheshire Constabulary’s Cyber Crime and Rural Crime teams, with the Constabulary’s Road Safety team and Cheshire and North Wales Police Dogs also represented at the two day event. The main police stand secured the runner up rosette for Best Trade Stand at this year’s show.

The Royal Cheshire Show has been running for over 100 years, with people travelling from all over the country to be part of the event and 2022 was no exception.

The two days provided an excellent opportunity for the Commissioner’s team to interact with residents of Cheshire to find out what they need and expect from their police service. Many visitors got involved with the recently-launched Rural Crime Survey, providing the Commissioner with their perspective on criminal activity and police action in their area.

“The two days spent speaking to people at the Royal Cheshire Show have been a huge success. It is great to have these opportunities for my office and police officers to speak to local residents and hear what people want directly.

“I am so grateful to everyone who took their time to stop and talk with officers and my team, complete my survey and share their feedback on their experiences with crime and the police.”

The Cyber Crime team were very popular with the show’s crowds, offering a free Cyber Health Check and providing important advice on how to stay safe online.

Families were also drawn in by the Rural Crime Team’s police car, with children stopping by to take a closer look and learn a little more about the team’s role in keeping Cheshire safe.

Also representing Cheshire Constabulary at the show were the Road Safety ream, who had their ‘THINK’ car on display, which had been involved in a road traffic collision and aims to educate people about dangerous driving practices. The officers were sharing their advice on how to stay safe on the roads, including promoting the ‘Fatal 5’ campaign, which shares the five main contributory factors that cause serious road traffic collisions.

The Fatal Five are:

Cheshire and North Wales Police Dogs were also a firm favourite with the visitors, with dogs and handlers taking part in amazing demonstrations giving the public an opportunity to see them in action.

“It has been an honour to be involved with the Royal Cheshire Show and I would like to thank my office and the teams from Cheshire Constabulary for their hard work. I am delighted with the response we had from visitors, so thank you everyone who took their time to stop and share their thoughts with us.”

To have your say in the Rural Crime Survey, visit: