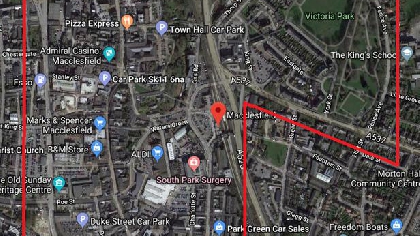 Officers in Macclesfield have been given more powers to stop and search anyone they suspect of carrying a weapon.

It follows concerns raised by the local community after a number of incidents at Macclesfield Fair.

The powers have been granted temporarily under Section 60 of the Criminal Justice and Public Order Act (1994).

The order means that officers can stop and search any person or vehicle theybelieve may be carrying weapons or causing serious violence in a particular area, whether or not they have any grounds of suspicion.

The powers will be in place from 2pm today, Saturday 23 March, and will remain in force until 1am on Sunday 24 March. It applies to a large area of Macclesfield, including the town centre and Victoria Park.

Inspector Penny Jones said: “Macclesfield Fair is a family event and we want all those attending to have a safe and enjoyable time.

“Sadly, last night there were a number of people who were intent on causing trouble which is why we have authorised these powers.

“The order will remain in place until 1am on Sunday and I would warn anyone with the intention of being disruptive or acting in an anti-social manner to stay away.

“There will be an additional police presence across the town anyone behaving in a disorderly manner will be targeted.