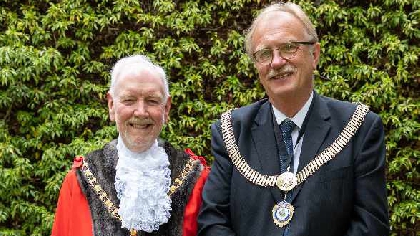 Councillor Barry Burkhill has been elected as Mayor of Cheshire East

He was sworn in at the annual mayor-making ceremony on Wednesday 22 May.

His deputy, elected by members, is Councillor Steven Edgar, who represents Haslington, near Crewe.

Cllr Burkhill has represented Handforth for 38 years and for 28 years was a member of Macclesfield Borough Council, of which he was elected mayor in 2007. Cllr Burkhill was elected as a member of Cheshire East Council in 2011. He has sat on a number of council committees, including planning, licensing and corporate overview and scrutiny.

By tradition, both the mayor and deputy mayor are non-political roles, carrying out civic duties on behalf of the council and residents of the borough.

The mayor chairs meetings of Cheshire East Council and can use his or her casting vote, if required to do so.

The mayor is seen as the first citizen of the borough and can expect to attend many events during the civic year. These can range from fun events among communities and local schools to solemn occasions such as Remembrance Day.

Cllr Burkhill, who has a keen interest in medieval history, music and his university subject of geology, was sworn into office, along with his wife Sue as mayoress, at a civic ceremony held at Tatton Park’s Tenants Hall. The ceremony was attended by special guests and dignitaries from around the borough, including local mayors from town councils, Aldermen and members of Cheshire East Council.

Cllr Burkhill said on his election as mayor: “Although it has been totally unexpected to be asked to become mayor for the 2019/20 municipal year, it is nevertheless an honour and a privilege to represent the people of Cheshire East.

“These are difficult times and my wife, Sue, and I will be using the year ahead to highlight the prodigious voluntary work that is daily carried out throughout the borough. In particular, we look forward to visiting all centres which work with food banks and homeless people and support those of our number who face challenging times.”

“I thank you all for your support and my wife and I hope to be very worthy successors to Lesley and David Smetham, the outgoing mayor and her consort.”

Cllr Burkhill’s first duty was to chair the annual meeting of the new Cheshire East Council later that day.