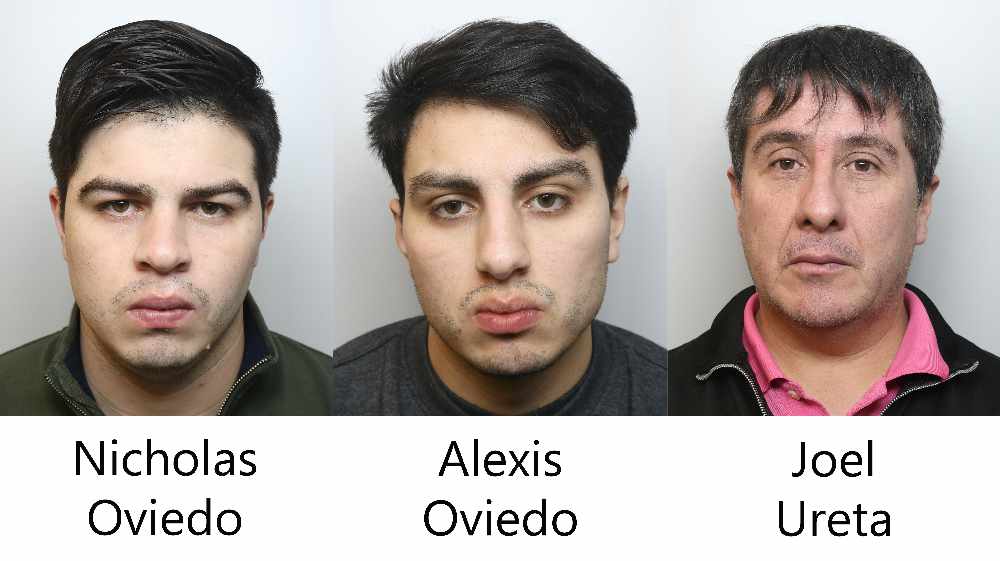 Three men from Chile who travelled to Cheshire with the intention of committing crime have been jailed for more than 13 years.

Nicholas Oviedo, 26, Alexis Oviedo, 25, and Joel Ureta, 42, were all members of an organised crime gang that arrived in the UK in January with the sole aim of committing burglaries at high-value homes.

After arriving in the country, they set up base at a hotel in Manchester and hired a car to help them commit their offences.

Between Saturday 4 January and Wednesday 15 January the trio committed multiple burglaries in affluent areas of Cheshire.

Thankfully, their crime spree was brought to an end when a man out walking on Legh Road, Knutsford, heard an alarm going off at a nearby address.

He approached the house and noticed two men, who were acting suspiciously, getting into the car that the trio had hired, a dark Mercedes-Benz C-Class, which was parked near to the entrance.

The man made a note of the registration number and reported his concerns to Cheshire Constabulary.

Officers quickly attended the scene and confirmed that there had been a break-in at the address.

A police marker was subsequently placed on the vehicle.

The car was later stopped by officers in Greater Manchester and the three occupants were arrested and transferred to Cheshire.

An investigation was launched by detectives from Macclesfield CID and they uncovered evidence, including ANPR data and cell-site analysis, which linked the men to at least seven burglaries, committed in the Knutsford, Alderley Edge, Wilmslow and Prestbury areas.

The trio, all of no fixed address, subsequently pleaded guilty to seven counts of burglary.

They were all sentenced at Chester Crown Court on Wednesday 1 July.

They were jailed for a combined total of 13 years and four months.

Alexis Oviedo and Ureta were both handed custodial sentences of four years and eight months.

Following their sentencing, Detective Inspector Adam Alexander, who led the investigation, said: “Nicholas Oviedo, Alexis Oviedo and Joel Ureta are all members of a sophisticated organised crime gang that travels the world intent on committing crime.

“The burglaries were carefully planned and the trio specifically targeted high-value homes with the aim of stealing valuable items, including jewellery, before fleeing the country and hoping to evade justice.

"In just 11 days the gang carried out at least seven burglaries and stole goods worth more than £118,000.

“Thankfully, as a result of an eagle-eyed neighbour and the work of a dedicated team of detectives, they are now facing the consequences of their actions.”

This is the second case of ‘burglary tourism’ convictions in Cheshire in recent weeks.

Following the successful prosecutions, the force is continuing to work closely with a number of agencies to deter other people coming to Cheshire to commit crimes.

Detective Chief Inspector Clare Coleman, Crime Manager at Cheshire Constabulary, said: “Prevention is a key part of what we do and, on the back of this case, we are working closely with agencies, including Border Force and Manchester Airport, to help identify other potential offenders and stop them from coming into the UK.

“Our officers are committed to doing all they can to identify offenders and stop them in their tracks.

“I hope that this case acts as a warning to anyone who is planning on travelling to Cheshire to commit crimes. Our message to them is don’t make a wasted journey.”

Police and Crime Commissioner David Keane added: “The work of organised crime gangs does not only have a devastating impact on the victims of the crimes but also on the whole community.

“I would like to praise the work of Cheshire Constabulary’s officers in bringing the perpetrators of these despicable crimes to justice.

“I also urge anyone living in our communities who may have information in relation to organised crime gangs to report it to the police or anonymously to Crimestoppers. With your help, we can disrupt more of this type of crime and make our communities safer.”

All three men will be deported to Chile, South America, once they have served their sentences.