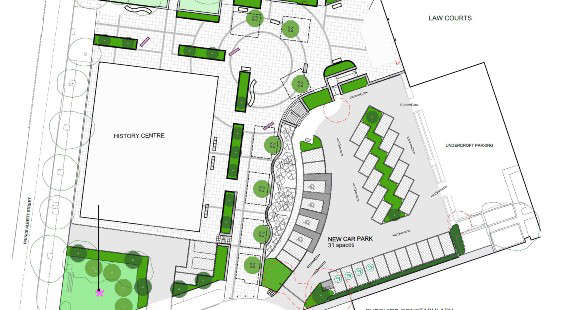 Plans are being progressed to transform an area between the Lifestyle Centre and Memorial Square and deliver the first phase of a public realm scheme – which includes new planting, lighting and seating – as well as to clear the site of Crewe’s former library and structure over the existing Civic Centre car park to make way for a new state-of-the-art history centre, which would house part of Cheshire’s extensive archives.

The plans also include delivery of a new car park and a new two-storey entrance to the Magistrates’ Courts.

Next Thursday (13 October), detailed information about the proposals will be on display at Crewe Market Hall from 1-5pm, when council officers will be on hand to answer questions and to take feedback.

The project is part of a package of 10 being progressed following Cheshire East Council’s successful £14.1m bid to the government’s Future High Streets Fund and is also supported through Crewe’s allocation of up to £22.9m from the government’s Towns Fund.

A planning application for the scheme is expected to be submitted in November. Subject to planning consent, it is anticipated that work could begin on phase one in spring next year and finish in early 2024.

Councillor Nick Mannion, chair of Cheshire East Council’s economy and growth committee, said: “This project would provide the first part of a new and attractive pedestrian link through the cultural and civic quarter of the town centre and regenerate a space that historically has attracted anti-social behaviour.

“Importantly, it would also provide the clear site that is needed to build one of two new history centres planned for Cheshire and create a high-quality and attractive setting for it.

“I urge people to attend the public exhibition and take a closer look at the plans, and how it fits into our wider long-term vision for the town.”

The plans for a new history centre in Crewe are being driven forward by Cheshire Archives and Local Studies, which is a shared service of Cheshire East and Cheshire West and Chester Councils and looks after Cheshire’s unique and irreplaceable written and pictorial history.

The project, called ‘Cheshire’s archives: a story shared’, is supported by the National Lottery Heritage Fund and proposes a completely new history centre in Crewe and a new centre in Chester to replace the archive service’s current facility, which is no longer fit for purpose.

Planning applications for the history centres are expected to also be submitted in November.

Completion of the final second phase of public realm works adjacent to the planned history centre will be delivered following construction of the centre and will include high-quality paving and planting areas, activity space, new seating, bike racks and public art.

The second phase is supported by the government’s Towns Fund.