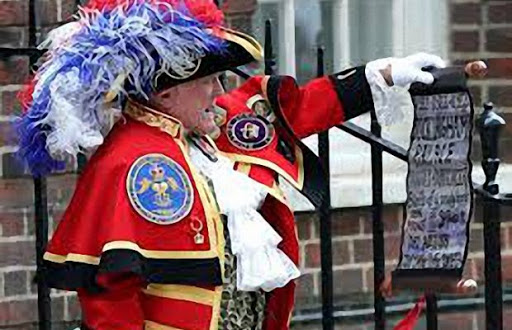 Following last year’s Town Crier Championships, the event is to be staged once again this year.

Following last year’s Town Crier Championships, the event is to be staged once again this year.

It is to be held on Sunday 29th of March, in the grounds of St Michael’s Church in the town centre. The criers will be starting at 11 am, after a short parade from King Edward Street to the church.

After last year’s first ever successful event, Town Criers from across the country heard about the championships and many were asking to be put on the list for this year’s contest. Criers from as far afield as Mablethorpe, Southport, Sleighford and Darlington will be appearing. Hopefully appearing, will be the oldest Town Crier in the country - Mr Cyril Richardson who is just 91 years young.

Town crying competitions are not just about being loud and ringing a bell. There are two stages, the first is the home cry which tells the audience about the town from which they hail and the second round is about a chosen subject. Contestants have to stand in front of a panel of judges and be judged on several categories. They are confidence and bearing, volume and clarity, diction and inflection, accuracy and of course how they are dressed, to ensure it is in keeping of the period. When delivering the proclamation they have just 75 to 125 words to give as much information as possible.

This year’s subject cry is “Macclesfield’s Bate Hall” the most haunted pub in Great Britain. You will be able to see some loud, colourful eccentric men, dressed in 17th century attire at the event which takes place on Sunday 29th of March.