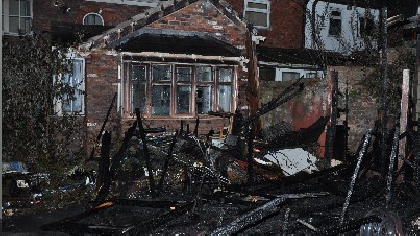 A Middlewich man who put lives at risk in a bid to get his ex-partner in trouble with the police has been jailed.

Robert Helm started a fire in stables at the back of a row of houses in Cledford Lane, Middlewich, at around 10.30pm on Monday 23 October 2017.

The 47-year-old was living in one of the houses at the time.

The fire damaged one of the properties and spread to a workshop close to the stables.

It completely destroyed the stables, which had no animals inside, and smoke from the fire caused extensive damage to the workshop.

The back of the house that was closest to the stables suffered heat damage but thankfully no-one was injured as a result of the fire.

Helm admitted starting the fire, pleading guilty to a charge of arson with being reckless as to whether life was endangered at Chester Crown Court.

He returned to the court for sentencing on Friday 5 April, where he was jailed for three years.

Detective Constable Liz Rankin, of Crewe CID, said: “At around 10.40pm on Monday 23 October 2017 Robert Helm flagged down officers to tell them that he had discovered a fire behind a row of houses in Cledford Lane.

“His ex-partner had visited his home earlier that night and Helm intimated to police that she was responsible for the fire and later told an officer that he had seen her starting it.

“However, our investigation into the incident showed that this was not the case and uncovered CCTV footage showing that it was Helm who went into the stables that night, and he eventually admitted starting the fire.

“Arson is an extremely serious offence with potentially fatal consequences.

“Thankfully, in this instance the fire was extinguished by firefighters before it could spread further than it did and no-one was hurt as a result of Helm’s actions.

“I hope that the custodial sentence he has been handed by Chester Crown Court deters others from committing similar offences and I would like to thank the firefighters from Cheshire Fire and Rescue Service for their work on the night of the fire and for their support during the investigation.”

People living in Cledford Lane had to be evacuated from their home that night as a result of Helm’s actions.

Matt Barlow, Service Delivery Manager at Cheshire Fire and Rescue Service, said: “Three fire engines – from Sandbach, Middlewich and Holmes Chapel – attended the incident and firefighters were at the scene for around three hours.

“They were able to extinguish the fire with a hose reel jet before it could spread beyond the stables and a workshop.

“Although no-one was injured as a result of the fire, it completely destroyed the stables, caused considerable damage to the workshop and also damaged someone’s home.

“Arson is a terrible crime – costing taxpayers thousands of pounds as well as putting people’s lives in danger – and I hope that the case and Friday’s sentencing makes others think twice before starting fires.”