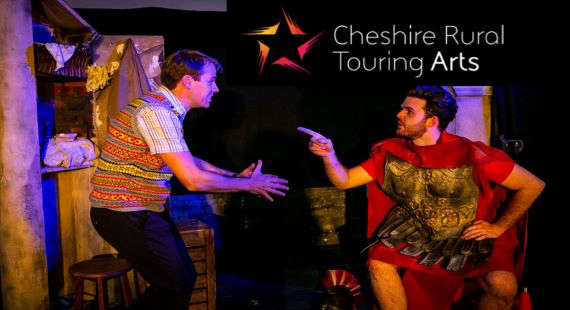 The rural touring theatre – supported by Cheshire East and Cheshire West and Chester Councils and Arts Council England – will be putting on exciting performances across the borough this autumn.

Show highlights for the coming season in Cheshire East include a one man show from Jeffrey Holland – who appeared in Hi-de-Hi – called ‘This is My Friend Mr Laurel’ at Macclesfield Library.

There is also a rollicking whistle-stop tour of French music from FiFi La Mer at Plumley Village Hall, who cover everything from Offenbach to Gainsbourg and a comedy theatre show at Gawsworth Village Hall called ‘The Frozen Roman’ about a village where the pub is being threatened with closure to make way for a housing development.

The new season marks a welcome return to more regular theatrical performances across the whole county and it is hoped that residents will support them wherever possible.

Councillor Nick Mannion, chair of Cheshire East Council’s economy and growth committee, said: “The return of theatrical shows to the more rural parts of our borough allows everyone access to high quality performances on our rural doorsteps but is also a way of animating community buildings or spaces and bringing communities together safely.

“Comedy shows and theatre performances are something that many of our residents really cherish and these productions – in some instances simply one person shows –bring great joy to so many people.

“I do hope residents will be able to get along to one or two of the shows this autumn and support what for many is often the lifeblood of village life.”

Performance details and online booking is available at: