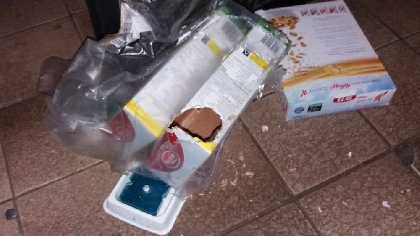 The owner of a Winsford retail food shop and off licence has received a four-month custodial sentence, suspended for 18 months, for food safety offences.

Mr Muhammed Afzal (28), of Sharples Street, Accrington, Blackburn, was the sole trader of the One Stop Shop, 95 to 101 Delamere Street, Winsford.

As well as the suspended sentence, Mr Afzal received 20 days Rehabilitation Activity Requirement, 120 hours of unpaid work and was also ordered to pay £500 towards the costs incurred by Cheshire West and Chester Council.

Chester Crown Court also imposed a hygiene prohibition order against Mr Afzalpreventing him from being involved in the future management of any food business in the UK.

The court heard that during an inspection at his premises on 12 January 2018, Regulatory Services officers carried out a routine food hygiene inspection and found very poor standards of cleaning throughout and evidence of a rat and mouse infestation.

It was the worst condition officers, who have over 30 years’ experience, had witnessed, with evidence of pests discovered throughout the premises. Rodent droppings, foul odours, gnawed packets of food and a decaying rat carcase were discovered in the premises. The officers secured a voluntary closure of the premises and the business is no longer trading.

Whilst Mr Afzal had engaged the service of a pest control company Judge Brandon, upon sentencing, stated that Mr Afzal had failed to follow their recommendations. He did not carry out a deep clean of the premises and remove the droppings and the dead rat.

Judge Brandon stated that there was a clear risk to the health of the general public and staff and that this could not be ignored. The issuing of the hygiene prohibition order was needed to protect public health in the future.

The Council’s Director of Place Operations, Maria Byrne said: “The safety of customers must be the top priority for any food business and food safety officers within our Regulatory Services Team work proactively to help business owners comply with legislation and meet hygiene standards.

“This case demonstrates the serious consequences of clear breaches of food safety and hygiene law.  The Council has a duty to protect the health of the general public and in this case, officers had witnessed extremely poor conditions that posed a significant risk to the public and staff working at the premises.

“Mr Afzal had a complete lack of knowledge about food safety and had operated the business in an extremely poor and unsafe manner.  The action of the Council sends a clear message that such conditions will not be tolerated in food businesses operating in Cheshire West and Chester.”