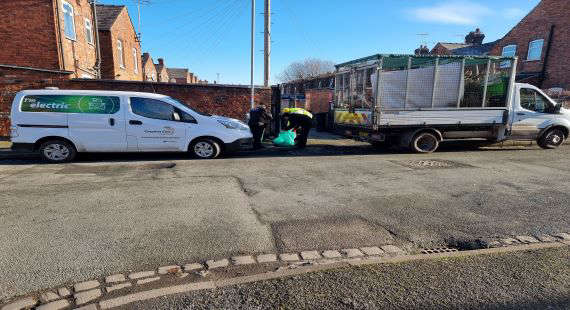 The introduction of an ambitious clean-up project in Crewe last year is already reaping dividends with cleaner streets and fewer incidents of fly-tipping being reported.

The aim of Cleaner Crewe is to tackle streets and alleyways in Crewe, which have been blighted by poor waste management, including contamination of bins and fly-tipping.

The project started with a period of engagement with residents in the spring and summer of 2021 and towards the latter part of the year moved to enforcement with the introduction of new powers in the form of legislation called a section 46 notice.

The enforcement aspects of the project were further enhanced by Crewe Town Council, which provided the funding for another community enforcement officer, in addition to supplying the project with equipment for clean-up operations.

A project to regenerate the alleyways also started in 2021 with 65 volunteers, residents, alley champions, Crewe Town Council rangers and the local MP Dr Kieran Mullan, spending more than 52 hours across the project cleaning up eight alleyways and wall-mounting more than 350 flowerpots.

Councillor Mick Warren, chair of Cheshire East Council’s environment and communities committee, said: “It’s great to see that the incredibly hard work of so many colleagues, partners and community volunteers is really starting to be rewarded. It has truly been a one team approach getting to where we are now.

“The issuing of fines to people is the last step in the council’s enforcement policy and we are now seeing that this is acting as a proper deterrent to people thinking about dumping waste. Our enforcement officers and colleagues in the Ansa street cleansing team have worked together to great effect and the results have been truly impressive.

“We know that there is still a long way to go and of course the proof of the pudding will be in how sustainable this can be. The early signs are very positive and our commitment to the work isn’t about to dwindle. I’m confident that this is just the start of something transformative.”

Since November, the clean-up teams have completed 119 investigations, of which around 50 per cent contained evidence within the waste leading to further lines of enquiry.

Six £200 fines and two £400 fines for fly-tipping offences have been issued along with 16 formal breach of section 46 warning letters, one of which resulted in a further £60 fine – a clear sign that the council is determined to use its legal powers where necessary to keep Crewe’s streets clean.

More importantly than the fines though, the project is already having a transformative effect on the behaviour of local residents in the area where it has been rolled out, with people more inclined to challenge and to report incidents of fly-tipping that still occur.

A new community resident’s group called Friends of Crewe Alleyways has also been established and the programme will continue throughout 2022.