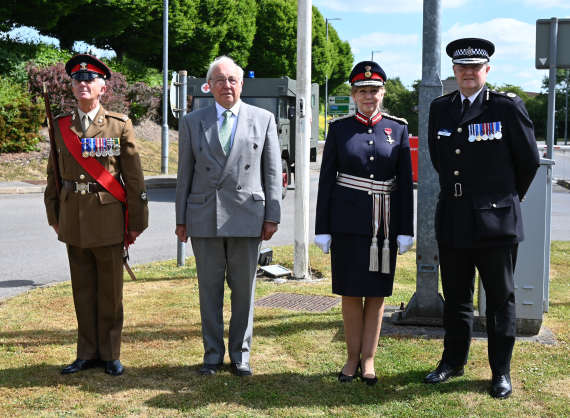 Cheshire Constabulary has reaffirmed its immense support for the UK military by holding the biggest Armed Forces Day flag raising ceremony in the county.

More than 100 people attended the ceremony at its headquarters in Winsford today (Monday 20 June).

Regular, reserve, cadet and veteran Armed Forces organisations were represented at the event.

“We were delighted to be able to invite them to our headquarters to kickstart the 2022 Armed Forces Day celebrations.

“The flag raising ceremony we held the previous year was limited to 30 people because of Covid-19 restrictions.

“It was fantastic to be able to open up the event to more members of the Armed Forces community this year, and the ceremony ended up being not just the biggest in Cheshire, but one of the biggest in the entire North West of England.

“This year’s flag raising ceremony was a fitting way to show our respect to all members of the Armed Forces community and the fantastic work they have done, and continue to do, to keep our country safe.

“At Cheshire Constabulary we highly value the skills, attributes and experience of those with an Armed Forces background and continue to endeavour to be an employer of choice for those leaving the services.”

Armed Forces Day offers the chance to show support for the men and women who make up the Armed Forces community, from currently serving troops to service families, veterans and cadets.

It always takes place on the last Saturday of June.

The celebrations begin with the Armed Forces Day flag being raised on buildings and famous landmarks around the country on the Monday of that week.

Held on the Wednesday of that week, Reserves Day provides an opportunity for the country to recognise our reserve forces.

The flag will remain raised for the rest of the week.

Mr Dwyer added: “It was an honour to be able to join even more members of the Armed Forces this year to show our respect and thanks for their service.

“The Armed Forces community does amazing work to keep our country and communities safe, and it’s right that we pay our respects here in Cheshire.

“I hope that everyone in our county takes time on Armed Forces Day to reflect and pay respect to those who protect our country.”

Cheshire is home to a diverse representation of the Armed Forces community.

Regular, reserve, cadet and regimental associations and the ubiquitous British Legion are all well represented in the county.

They were all invited to the flag raising ceremony, as were their spouses and partners.

Last year Cheshire Constabulary became one of 38 organisations from across the North West to receive Silver under the Ministry of Defence Employer Recognition Scheme for support to the Armed Forces community.

The Employer Recognition Scheme was launched to reward employers who support defence people objectives and encourage others to do the same.

This includes employing serving and former members of the Armed Forces community and demonstrating flexibility towards training and mobilisation commitments for reservists and cadet force adult volunteers.