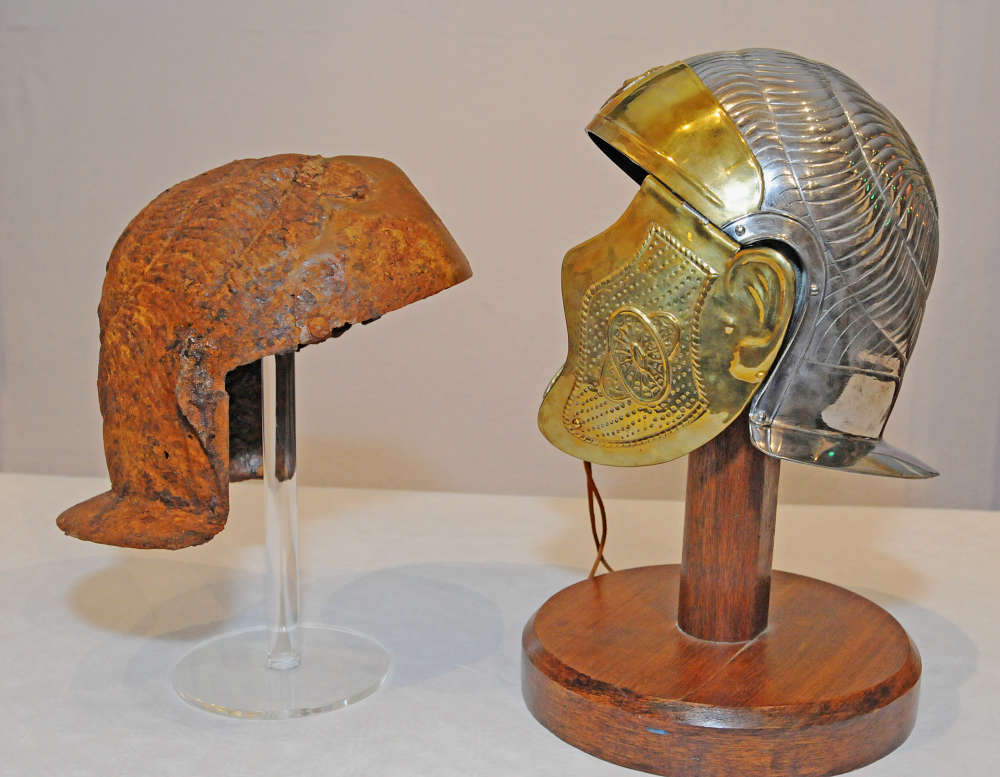 Lion Salt Works Museum’s fascinating new exhibition opens on 15th October to 30th April. The exhibition includes a copy of a rare Roman helmet made of iron, found in Northwich.

The mining of precious metals was a key objective of the military invasion of Wales by the Romans but of almost equal importance was the much-prized salt beneath the nearby Cheshire Plain. In a fascinating new exhibition at the Lion Salt Works Museum, this story is explored in an exhibition called ‘The Romans and the Salt Towns of Cheshire’, opening on 15 October – 30 April. Visitors will have the opportunity to see some of West Cheshire Museum’s Roman Collection and also look at a copy of the famous Northwich Cavalryman’s helmet. Entry to the exhibition is included in the standard entry price of the museum*. For further information go to:

Salt is critical to the human body as without it the body cannot sweat. So, for a life of marching, fighting and fort-building, salt was crucial to a Roman soldier’s well-being. It was so important, that each soldier received a small amount of salt with his wages and it is thought that the word ‘salary’ is derived from the Latin for salt. This meant the rare salt-producing settlements in the Roman Empire were much prized, like the Cheshire salt towns of Northwich and Middlewich.

This exhibition explores how the invading Romans required the Cornovei tribe to continue to make salt by open-pan salt-making. This involved boiling the salt-saturated ‘brine’ from naturally-occurring pools (that had risen through fissures from the salt layer below) until white salt crystals formed. The Romans protected this precious commodity with auxiliary forts, such as one in Northwich, which was reinforced with cavalrymen. Middlewich was so abundant in salt it was known as Salinae (Salt Town) and five roads were built so this precious commodity could be easily distributed.

For over two thousand years, open-pan, salt-making continued in an unbroken tradition in Cheshire and was made in exactly the same way until the Lion Salt Works ceased trading in 1986. As one of the last open-pan, salt-making sites in the world, it became a Scheduled Ancient Monument (with the same protection status as Stonehenge and Hadrian’s Wall) and was restored in 2015 at a cost of £10.2m by West Cheshire and Chester Council. The museum explores how salt impacted on the industry, landscape and people of the county and beyond. Salt continues to be an important business in Cheshire today.

Councillor Louise Gittins, Leader of Cheshire West and Chester Council, said: “The little-known importance of Cheshire’s salt towns to the Romans is revealed in this fascinating exhibition. I am very pleased that people will quite literally have a chance to feel the past thanks to the museum’s ‘Handling Collection’. The history of Cheshire cannot be really understood without knowing about the importance of salt.  I hope that as many people as possible are able to visit this fascinating exhibition.

Pictured - Original and replica of the Roman Auxiliary Cavalry Helmet, discovered in Northwich and on display at Weaver Hall Museum in Northwich.