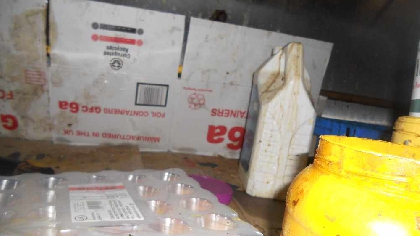 The owners of a restaurant in Northwich have been sentenced for food safety and hygiene offences at Chester Magistrates’ Court.

Both also were issued with an indefinite Hygiene Prohibition Order banning them from being involved in the management of any food business across the UK.

A significant build of dirt and food debris was found throughout the food handling and storage areas, floor surfaces were found to be in a poor condition, there was no hot water available at the wash hand basin and there was an evident lack of food safety management control in the business.

Unfit food was voluntarily surrendered and destroyed at the time of visit and the premises were voluntarily closed with immediate effect until the premises had undergone a deep clean and adequate refrigeration equipment could be provided for the safe storage of food. The premises re-opened two days later when officers were satisfied that there was no longer an imminent risk to public health.  Further visits were made by officers in order to monitor standards and they were found to meet minimum requirements.

A further programmed inspection was carried out on 11 December 2018.  Officers then found an outside breezeblock shed being used to store food was very heavily contaminated with mouse droppings on the food as well as throughout the structure of the shed.

The main premises remained in poor structural condition and cleaning and hygiene standards were only marginally better than during the visit of 27 June 2018. Under the supervision of the officers all contaminated dry goods were destroyed on site. The outside building was voluntarily closed and it was agreed that it would not be used until it was cleared of pests and decontaminated.  Officers revisited the premises and found minimum standards of food hygiene and safety to be in place.

A further visit to the premises was made on 8 May 2019 to investigate a complaint alleging an illegal gas installation. On this occasion officers found there to be no hot water supply to the premises, poor cleaning and structural standards, risks of cross contamination and lack of food safety management control.

Judge HHJ Teague said that the defendants showed a total disregard to food safety, the business was in a truly appalling state of affairs and the place was absolutely filthy. He found it difficult to apportion blame due to the inconsistent accounts given by both defendants.

The Council’s Deputy Leader and Cabinet Member for Environment, Highways and Strategic Transport, Councillor Karen Shore said: “The vast majority of food establishments in Cheshire West operate to a high standard; we have a duty to the public to take effective action where others do not make the same effort.

“Officers had witnessed extremely poor conditions that posed a significant risk to the public and the indefinite ban imposed on the defendants sends a clear and strong message that the courts will treat such situations seriously.