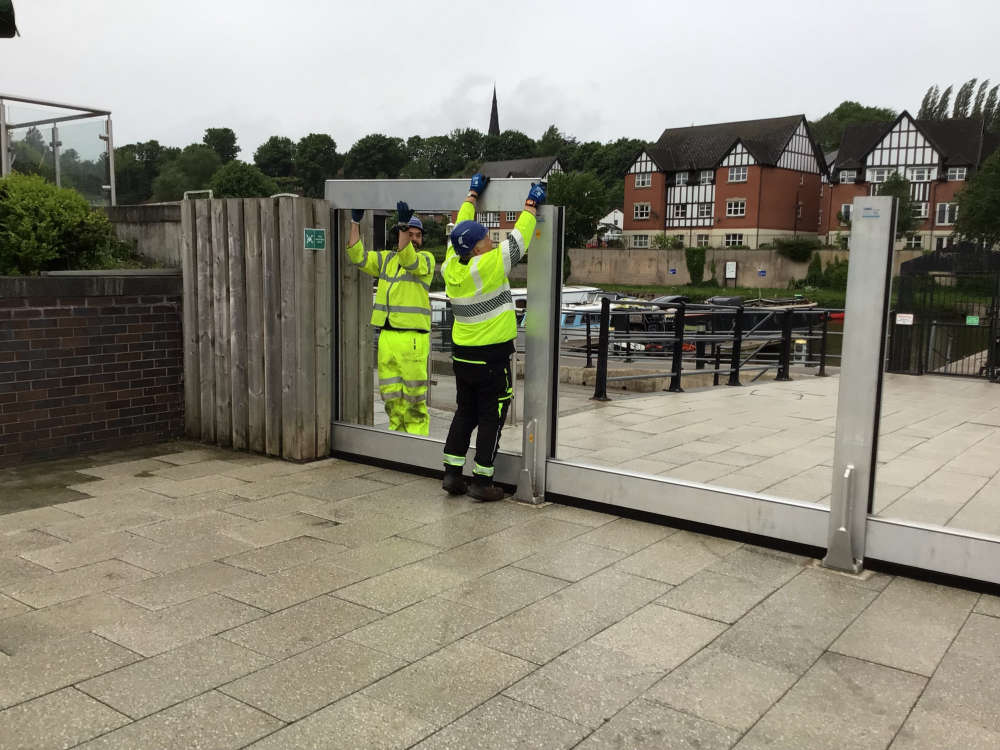 A selection of temporary and permanent flood barriers, which form part of the £7m Northwich flood risk management scheme, have been tested by the Environment Agency.

The large-scale exercise, which took place on Wednesday 18th May at 7pm, saw 100 metres of ‘demountable’ or temporary defences erected and 14 flood gates closed.

The exercise started with the closing of flood gates at Waitrose and the Dane Street Bridge, as well as setting up demountable flood defences outside Wildwood and the cinema. As part of this phase, the far end of London Road was also closed and a diversion provided.

Demountable defences are made of lightweight aluminium and can be erected in around 45 minutes in the event of a flood alert or warning.

The flood gates are closed in minutes and create a seal to protect the town from floodwater.

Since its launch in June 2018, the £7 million flood alleviation scheme, which reduces the flood risk to around 400 homes and businesses throughout the town, has been tested and maintained on regular basis with the last exercise taking place in November 2021.

“The best time to prepare for flooding is often on drier days and we are taking advantage of the better weather to ensure our £7m Northwich flood risk management scheme is ready to respond whenever it may be needed.

“Alongside our partners, we train all year round to make sure we are equipped to respond to incidents and I hope such emergency response plans will give reassurance to residents in Northwich.

“However, even with these plans in place, it is important to remember that we can never fully protect against flooding. Residents should always prepare in advance for this by going online at www.gov.uk and signing up for free flood warnings. Alternatively, they can telephone the Environment Agency Floodline on 0845 988 1188 and find out what they can do to protect themselves and their property when flooding hits.”

“Northwich and many areas of our borough suffered badly from flooding as a result of Storm Christoph in 2021. We have been working more closely with partners including the Environment Agency since this major flood event to prevent a repeat of further flooding damage occurring to homes and businesses.

“Our teams are supporting the Environment Agency’s important and large-scale exercise to test temporary and permanent flood defence barriers, which would be deployed in emergencies. It is vital all agencies are able to act swiftly to protect residents in the event of a flood in the future and testing such as this will help teams be well prepared for the future.”

Throughout this year the Environment Agency has continued to build and maintain flood defences across Greater Manchester, Merseyside and Cheshire, including projects in Radcliffe and Redvales, Rochdale and Littleborough as well as Penketh and Whittle Brooks

In the 2020 Budget the Government doubled its investment in flood and coastal erosion risk management in England by committing a record £5.2bn over the next six years. This long-term commitment will better protect hundreds of thousands of properties, including homes, businesses, schools and hospitals. More than £42 million of this will be spent in 2021-22 boosting the design and construction of more than 50 schemes across Greater Manchester, Merseyside and Cheshire.

Over 5 million homes are at risk of flooding in England alone and there are practical steps people can take to reduce the impact, including signing up to flood warnings and downloading our ‘What to do in a Flood’ plan.

Pictured - Northwich defences being erected in 2021.