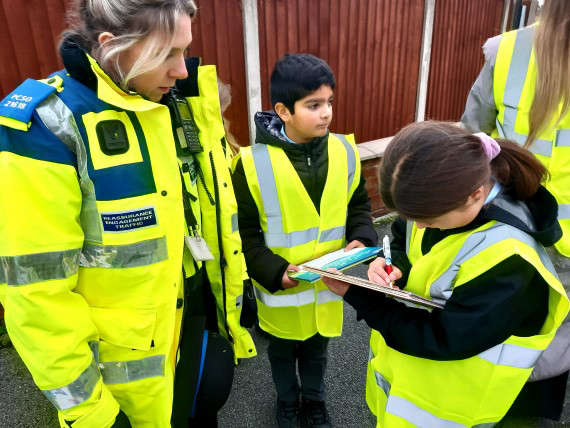 The Crewe Beat Management East and South block has stepped up its considerable efforts to make the town’s roads safer.

As well as the total of 972 vehicles being checked and 32 activations of speed exceeding 35mph, a further 84 vehicles were run through the Vehicle Smart app to check for MOT, road tax and insurance offences.

Operation to tackle speeding and parking offences on Wednesday 30 November

A speed enforcement operation was conducted with assistance from children at Mablins Lane Community Primary School in Crewe.

A total of 17 children were involved in the day of enforcement action.

Other aspects of the block’s multi-faceted road safety operation

• Operation Bike Lights: This has been supported by Crewe Town Council, who gave £500 in funding for the block to buy 100 bike lights from Halfords in Crewe. The lights are being given to local cyclists to make Crewe’s roads safer. Members of the block have visited local businesses and given lights to their employees who cycle to work. They have also handed out lights to cyclists for free whilst out on patrol. They follow the four Es of ‘engage’, ‘explain’, ‘educate’ and ‘enforce’, meaning that a ticket may be issued if a cyclist they encounter does not have an obligatory cycle lamp fitted.
• Operation Bike Helmet: This has been supported and funded by the Police and Crime Commissioner for Cheshire, John Dwyer. Years five and six of all primary schools in Crewe have been involved, with them being given the opportunity to design a bicycle helmet. A child’s design from each school will be picked as the winning designs. The winners, who will be chosen in January, will receive a helmet with their design on from the Hobbycraft arts and crafts store in Crewe.

Further days of enforcement action have already been planned for December, January and February.

They will again take place in the Crewe East and South areas.

All primary schools in those areas will become involved in the operation.

Crewe Beat Management Inspector Andy Smith said: “Our East and South block is working together as a team to make Crewe’s roads safer for all members of the community.

“The team is also working alongside local schools and the local council.

“By engaging with road users, explaining to them the laws around speeding, parking, MOTs, road tax, insurance, bicycle helmets and bike lights and educated them on the importance of adhering to those laws for their and other road users’ safety, our officers and PCSOs are making a concerted effort to keep our roads and community’s safe.

“They take enforcement action when necessary, and the results of the road safety operation to date are pleasing.

“They will continue to carry out enforcement days in the Crewe East and South areas, and to involve local primary school children in them – children need to be made aware of the importance of road safety both for now and for when they are driving themselves in the future.”