Porsche owners help to turbocharge fundraising for The Christie 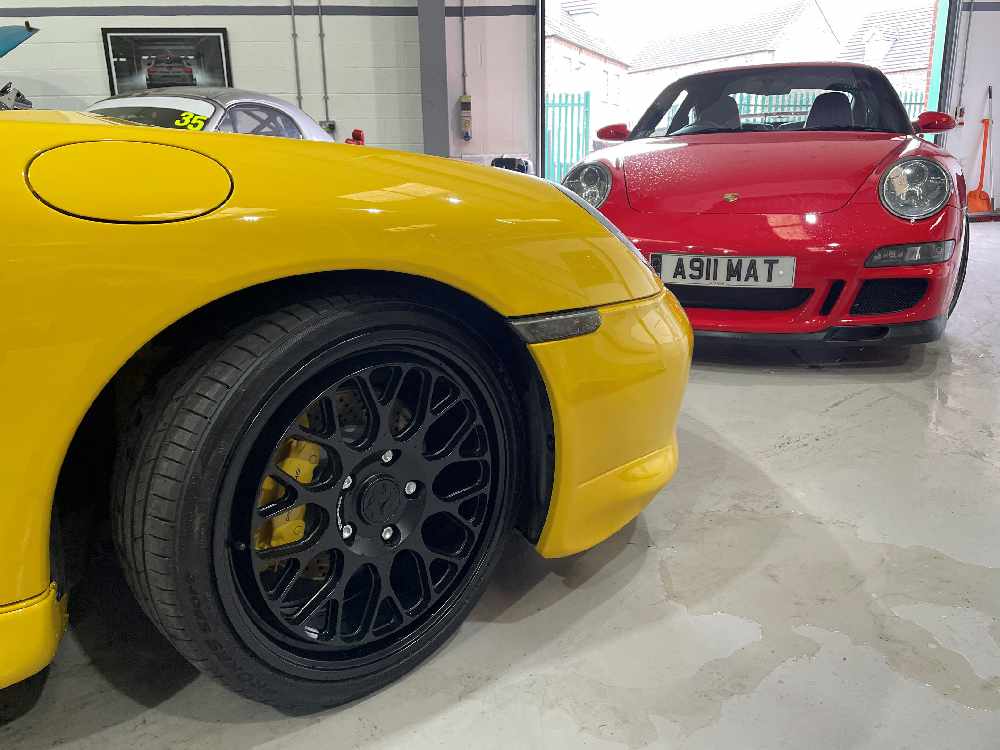 Owners and fans of Porsche cars from across the North West have pledged to make The Christie their charity of the year for 2021.

Members of the Porsche Club GB North West will help to turbo boost funds for The Christie at Macclesfield, a new £26m cancer centre.

The Christie at Macclesfield will provide care for around 1,500 existing cancer patients a year from Cheshire, the High Peak area of Derbyshire and parts of North Staffordshire.

Matt, a property developer from Delamere, Cheshire, is one of the hundreds of members of Porsche Club GB who have been touched by cancer. His wife Jeanie, who was also a member of Porsche Club GB, tragically passed away suddenly in July 2019 as a result of an undiagnosed brain tumour.

And Matt’s mother Adrienne, from Handforth, battled cancer shortly after Matt was born and then had thyroid cancer years later. She was treated at The Christie in 2014, receiving radiation therapy, which meant spending a week in a specialist lead-lined room after the treatment. She has been fit and well since.

Matt said: “I’m just one of many members of the club who have had their lives touched by cancer, some have had cancer themselves and others have had family and friends who have been affected. But we all know that by supporting The Christie we are doing something positive for cancer patients and their families and that the new Christie at Macclesfield centre will make a massive difference.

“Losing Jeanie was a huge shock. Aside from some bad headaches, she was never diagnosed and we didn’t know she was ill, so sadly she was never given the chance to be treated.

“Jeanie was a very likeable and memorable woman. She was gentle and caring and also professionally very successful. As a Territory Manager for the multinational pharmaceutical company Abbott Laboratories in the North West, she won multiple awards. As a result of being one of the top 10 reps for the company out of 430, she was rewarded by being able to take us on a fantastic all expenses paid holiday to the Seychelles just three years ago.

“I’ve been a member of Porsche Club GB for five years, becoming the Regional Organiser for the region since the start of the year and it is my way of giving something back. When I lost Jeanie, I got a huge amount of support and help from other members of the club and it really helped me get through it.”

Louise Dawson from The Christie charity said: “We’re delighted to be supported by the Porsche Club GB North West throughout 2021 and look forward to seeing the exciting and unique ways the club will be raising funds for The Christie at Macclesfield over the coming months. Our sincere thanks go out to Matt and all the members of the club for supporting us so generously.”

The club, which covers all of Cheshire, up to Liverpool, across to Manchester, down into parts of West Derbyshire and as far as Leek, organises around 25 events and activities each year.

They will be raising money at various classic car shows throughout the year, starting with Gawsworth Hall - Young Timer Car Show on the late Spring Bank Holiday, where around 75 members will attend with their Porsches. A range of other classic cars will also be on show at the Gawsworth Hall event, which costs £10 for visitors.

Other activities organised by the club include monthly ‘Saturday drives’ to places like the Lake District, the Peak District and North Wales, private events at Porsche dealerships to showcase new models and a track day at Anglesey in North Wales.

The highlight of the year is the Gold Cup event held over the August Bank Holiday at Oulton Park. There are around 250 Porsches on display and thousands of people attend each year. Part of the ticket sale price for the event will go directly towards The Christie at Macclesfield appeal. The Gold Cup event has been a fixture of the club’s calendar for around 10 years.

Matt, who has been a member of the Porsche Club for five years, owns several cars including two Porsche 911s – one Guards Red and one Speed Yellow. His love of the high performance marque started as a child, with a poster on his bedroom wall.

“There are so many things to love about Porsches”, said Matt. “They are a drivers’ car. They have a great motorsport history and there is so much wonderful heritage to the brand. I’ve owned five in my life. My favourite model is the GT3 (a road legal race car) that has been around for the last 20 years.”

To find out more about the Porsche Club North West please visit www.porscheclubgb.com/regions-registers/regions/north-west/north-west.

To support The Christie at Macclesfield fundraising appeal and find out more about this vital project please visit www.christies.org/macclesfield.

The Christie charity supports the work of The Christie NHS Foundation Trust providing enhanced services over and above what the NHS funds. This includes money for care and treatment, research, education and extra patient services. Gifts from the public make a huge difference to the care and treatment that The Christie is able to provide to patients and their families.

The Christie NHS Foundation Trust was the first specialist trust to be rated as ‘Outstanding’ twice (in 2016 and 2018) by the health regulator the Care Quality Commission (CQC). It referred to The Christie as ‘a leader in cancer care’ and ‘a pioneer in developing innovative solutions to cancer care.’ The CQC praised the Trust’s staff which it said ‘go the extra mile to meet the needs of patients and their families’ and that they were ‘exceptionally kind and caring.’ In 2017, the CQC rated The Christie as the best specialist trust in the country, and one of the top three trusts overall in England.