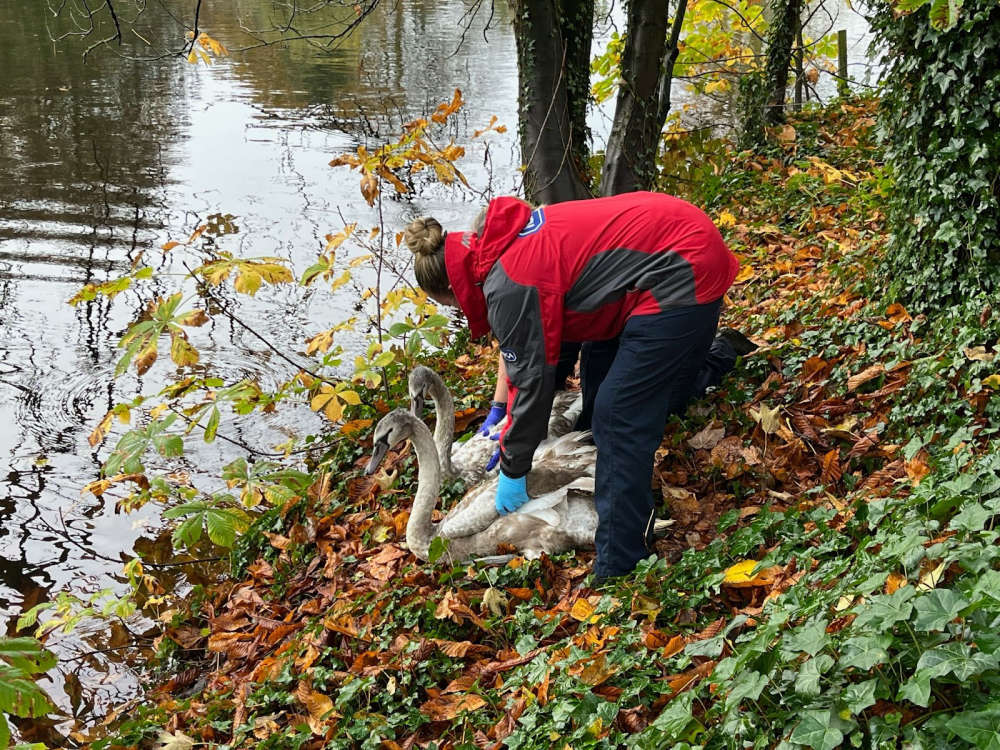 Staff and volunteers at a Cheshire-based RSPCA wildlife centre have worked against the clock to return a large number of birds back to the wild - despite the pressures of strict avian flu restrictions.

A major exercise swung into action when RSPCA Stapeley Grange had a 48-hour window to release 29 birds - with the charity’s inspectors and volunteer drivers also joining in to make sure everything went to plan.

Once the birds - 27 swans, one partridge and a duck - were swabbed for avian flu their samples were sent for testing at the offices of the Animal and Plant Health Agency in Weybridge in Surrey - a roundtrip of 360 miles from the wildlife centre near Nantwich.

The clock was ticking as two volunteer drivers met with a third volunteer to split the long journey and ensure that the test results and licences permitting the large-scale release were back in Cheshire in time.

Once all the paperwork was delivered Stapeley Grange staff were able to take the birds to seven different locations in Cheshire, the north west and Staffordshire where they were returned disease-free to their natural habitats.

RSPCA Stapeley Grange Wildlife Centre manager Lee Stewart said: “To release 29 birds like this required the support of not only our staff but additional volunteers and our inspectorate team were also brought in (including inspector Ann Bennett, pictured left).

“The releases had to be completed within 48 hours of the samples having been taken so the team was ready to move quickly hoping the licences and test results were back in time.

“Thankfully, everything went our way and we were able to return our birds, who were free of avian flu, back to the wild.

“This was only possible with the support of all involved; the Stapeley team of vets, wildlife assistants and office staff as well as volunteer drivers, RSPCA officers and staff at APHA.”

Stapeley Grange, along with other RSPCA wildlife centres across the country, has been on high alert for the past year when APHA first put in place avian flu restrictions.

The highly-pathogenic H5N1 strain of the disease has caused significant operational difficulties for the centres over how they manage their captive birds.

Long-term planning is in place so staff can track APHA's interactive map highlighting positive cases within captive birds. When cases are confirmed Prevention and Surveillance Zones are established around sites and restrictions put in place for anyone keeping captive animals, including wildlife.

Stapeley Grange has a general licence which allows the centre to accept and release mammals during an outbreak of bird flu, as well as take in injured, orphaned or sick wild birds. But there is a requirement for a specific licence based around testing for the disease before it can release birds who have been in its care for more than 14 days.

Waterfowl and gamebirds, such as those released by Stapeley, can be asymptomatic for avian flu and PCR swab testing is essential.

Lee added: “The past 12 months have been really hard for everyone involved in wild bird rehabilitation or conservation. Having to euthanise birds in our centres because of avian flu and seeing the impact of avian flu on wild bird populations is devastating.

“But this release of 29 birds was a rare highlight and a really uplifting experience for those who took part.”

High numbers of sick and dying birds are still being reported across the UK due to the avian flu outbreak and the UK Government continues to advise people not to touch or pick up any dead or visibly sick birds.

An RSPCA spokesperson added: “It's been devastating for the RSPCA - and wildlife lovers across the country - to see birds perish from this awful disease.

“Avian flu can be carried by all bird species, but seabirds, waterfowl and birds of prey are the most common species reported. This is a highly contagious disease within birds and it’s important to take all precautions to stop its spread.

To join the Winter Rescue, and help our rescuers be there for the animals in need, please visit our web page here.