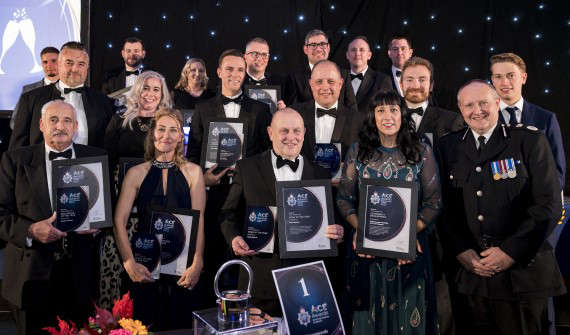 The awards are the Constabulary’s highest accolades that can be awarded to an individual or team that has gone that extra mile or demonstrated exceptional commitment to policing in Cheshire.

This year’s ceremony was the seventh annual event and took place at The Mere Golf Resort and Spa on Chester Road in Knutsford.

It was presented by ITV weather presenter Emma Jesson.

“Thankfully, it returned to an in person event this year, and I really enjoyed what was my first ACE Awards ceremony as Chief Constable.

“Since returning to the force earlier this year, I have been highly impressed by the standard of the work being done across the force every day to help keep Cheshire’s residents safe and make the county a hostile environment for criminals.

“The ACE Awards offers the chance to highlight and celebrate this work and the outstanding individuals and teams responsible for it.

“I would like to congratulate the winners of each of the 11 award categories and to thank all those who nominated an individual or a team this year.

“The award winners and shortlisted finalists thoroughly deserve recognition for their dedicated service to both the force and the communities we serve.”

Police and Crime Commissioner John Dwyer added: “The ACE awards are a platform to acknowledge and celebrate the sterling work and incredible achievements of Cheshire’s talented officers, staff and volunteers.

“I am proud of them all for their efforts to make our county an even safer place to live, work and visit and am glad that I had chance to attend the ceremony in Knutsford and congratulate the award winners in person.

“The 11 categories cover the wide range of fantastic work being done across the force.

“All those who attended the presentation could not have failed to have been impressed by the inspirational stories of the award winners and the other shortlisted finalists going the extra mile to keep Cheshire residents safe. I certainly was.”

A list of this year’s winners and their work during that timeframe is below.

By its very definition, community engagement is the involvement and participation of an individual for the welfare of their community. It is hard to imagine any duo in the organisation doing more for their community than Runcorn Police Constable Ian Hampson and PCSO Georgie Griffiths. From their dedication to young people through the KOPS 'n' Kids sport-based activity scheme to the education they provide around loan sharks in conjunction with the Illegal Money Lending Team and the volunteer work they do in their spare time, they truly epitomise the core values of Cheshire Constabulary.

Inspector James Wilson applied innovative thinking to create a Continuous Professional Development platform accessible to all staff, focusing on low frequency but high risk areas of policing. He arranges learning from internal experts, partners and other forces. James supplements the online sessions with a sustainable library of Command Cards. Working on the Constabulary's response to all major incidents and events, James understands the necessity of excellence in this area. His demanding 'day job' makes his additional accomplishments all the more impressive. James' work has enhanced knowledge and professional practice across the organisation.

Detective Sergeant Joe McNally is a true leader. He is committed to his team and serving the public of Cheshire, and he epitomises the force's values and principles. Joe is an inspirational person in every sense. He has unfaltering enthusiasm and the ability to bring teams together. Joe values his staff and is passionate about supporting and developing individuals so that they can be the best that they can be. Through his dedication, those who work under his supervision deliver the best service possible to the community that they serve.

PCSO of the Year (joint winners)

The fantastic service that PCSO Keith Bartlett gives to the force and the local community is capped off by his ongoing Safe School work. He devised the initiative after hearing that a 10-year-old from Hoole had walked a long way to his home at a time when the boy thought that he was being followed after school. The initiative sees businesses situated along known school walking routes display a sticker to signify that children are welcome to go inside if they feel in danger. It was launched in Hoole last year and is now being rolled out throughout the Cheshire West area.

PCSO Stefan Titans joined the Warrington East Beat Team last summer. From day one he has showed commitment, interest in the community, a dedication to problem solving and an incredible work ethic. Stefan has submitted more than 133 quality intelligence reports relating to local issues since becoming the Birchwood ward PCSO, which is an incredible amount. He has also referred the most vulnerable Warrington juveniles to the community partnerships via Community Safety Team letters, and Stefan's thirst for knowledge and willingness to improve each day is just as impressive as his figures.

Police Officer of the Year

Detective Constable Emily Cole has been involved in the investigation of major crime since 2008 and has made an outstanding contribution to policing. Numerous awards and feedback received show that she consistently operates at the top of the operational skills required for her role, always going above and beyond. Emily is exceptional in every aspect of her job in the Major Investigation Team (MIT). She has made a particular contribution to the innovative use of complex digital and telecommunications evidence at the force, and she has been central to the convictions of many dangerous offenders who received life sentences.

Police Staff of the Year

Jason de Prez uses his skills as a Financial Investigator in the Economic Crime Unit to recover proceeds of crime and assets from criminality, and he also provides support and guidance to colleagues. He demonstrates leadership skills by providing training across the force in this bespoke area. Furthermore, this year Jason created an activity reporting process and is now able to establish what income is expected to come into the force from Proceeds of Crime Act hearings and when. This, and the resulting performance framework, shows creativity and innovation which go beyond his day-to-day role.

Services to the Public

Communication Operator Shelley Packer answered a call from a mental health service concerned for a woman's welfare. She immediately made contact with the woman. Shelley used her compassion and professionalism to build a rapport, assess the risk and ensure that frontline teams were briefed. Using her communication skills, Shelley identified a potential location, and a search team located the woman unconscious, in need of immediate care but alive. Shelly is a credit to the Force Control Room and shows excellent communications skills. Her reassuring approach as the first contact many have with the Constabulary is outstanding.

Special Constable of the Year

Special Constable Nikolai Kalka took three months' unpaid time off from his own workplace and devoted this to the Constabulary during the pandemic, assisting with not only the Covid-19 response but all other aspects of policing. Nikolai has been deployed to a multitude of incidents and has thrown himself into all aspects of the job, showing an abundance of enthusiasm and willingness to learn. With no aspirations to join the Constabulary full-time, his devotion to public service along and his commitment, motivation and professionalism have been nothing short of exemplary.

Team of the year

The Runcorn Beat Team have collectively made a significant difference to the local community through engagement, joint agency collaborative work, being there for the people that need help and robust enforcement to take dangerous, habitual criminals off our streets. They have submitted more than 830 intelligence reports, conducted over 144 stop searches, executed 20 search warrants, made 153 arrests and driven a number of community projects forward. The team are professional, hardworking and clearly have the best interests of the community in mind in everything they do.

Volunteer of the Year

Damian Timmis is a hospital porter by trade who is also a volunteer trailing dog handler for Cheshire Search and Rescue and Search and Rescue Dog Association Wales. Damian and his dog Skye have supported the Constabulary in the search of vulnerable people for several years. They turn out in all weather, day or night, for no pay. They do so to help others when they need it the most. Damian and Skye's service and dedication to people who find themselves in harm's way after life has become too much to manage is simply outstanding.

The Rural Crime Team quickly established that rural policing is a team effort needing specialist skills and knowledge that sometimes can only be found outside the force. A huge effort was made to champion this, and it has set the tone for years to come. This has resulted in strong, trusting relationships being forged with a variety of external organisations, including wildlife charities and other enforcement agencies. This problem solving approach has helped to make rural Cheshire a safer place for all, with many successful operations and convictions under the team's belt.