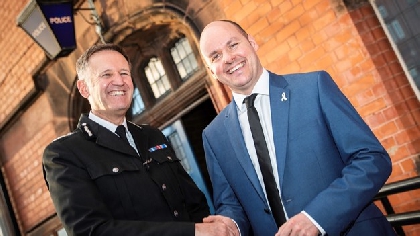 The panel has confirmed it has supported police and crime commissioner David Keane’s appointment following its meeting on Friday (8 February) in Winsford.

Mr Martland has taken on the role of acting chief constable since being announced as the commissioner’s preferred candidate for the permanent role last month.

Darren has served with Cheshire police since 2017, joining the force as an assistant chief constable before being promoted to the role of acting deputy chief constable. He has also worked at chief officer level in Cumbria Constabulary and has held local commander positions within Merseyside Police.

The proposed appointment was announced by the commissioner following a two-day rigorous interview process which involved support from key leaders across Cheshire and was carried out in accordance with the College of Policing guidance on the appointment of chief officers.

David said: “I am delighted to appoint Darren Martland as the new chief constable for Cheshire. Darren brings a wealth of experience, dedication and passion to the role. He performed very well throughout the whole recruitment process, demonstrating great leadership skills.

“When I started the recruitment process, I set out my requirements to recruit a new chief who shared my vision to establish a policing culture which promotes innovation, is compassionate to both its residents and its staff and seeks to make the most out of our highly valued partnerships.

“I believe that Darren has the necessary skills and experience to deliver this vision and I look forward to working with him to ensure Cheshire delivers the best police service for its communities and remains one of the safest counties in the country.”

CC Darren Martland added: “I feel honoured and privileged to have been selected as the new chief constable of Cheshire Constabulary, which is a first class organisation. I joined Cheshire Constabulary in 1999, as a sergeant, before transferring to Merseyside Police in 2006, and subsequently returning to Cheshire in 2017.

“I am looking forward to working with our excellent staff, volunteers and partners in order to deliver the police and crime commissioner’s police and crime plan and making Cheshire one of the safest counties in the country.

“My main priority over the next few weeks is to be as visible as possible, and getting to know our staff and the communities in Cheshire.”