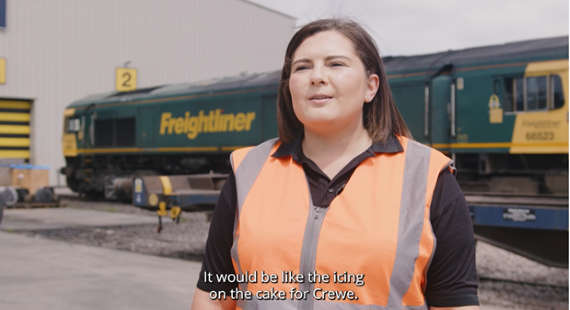 A new documentary film launched on Thursday of last week to celebrate Crewe’s history as a rail town and look to the town’s future.

The mini documentary, called Heart of Rail, has been created to tell Crewe’s compelling rail story and support the town’s bid to become the home of Great British Railways (GBR).

It showcases Crewe’s position at the heart of Britain’s railways, highlighting how the town’s proud rail heritage, connectivity and thriving rail industry makes it the perfect location for the GBR headquarters.

Great British Railways is the new national rail operator, which will be up and running from 2023.

Crewe is one of six towns and cities shortlisted to become the home of this important new public body, which will have responsibility for all aspects of Britain’s railways, including infrastructure, timetables and fares.

Demonstrating strong public support is a vital part of the bidding process.

The film features people from across Crewe who are coming together to back the town’s bid and show how rail is in the blood of people in Crewe. Among those featured in the film are representatives from the rail industry, local businesses, culture and heritage organisations and Crewe Alexandra Football Club.

Councillor Sam Corcoran, leader of Cheshire East Council, said: “Most people you speak to in Crewe have some connection to the railway and you really get a sense of this history and heritage throughout this truly emotional film.

"What also comes through is the passion of our people. Bringing Great British Railways to our town would mean so much to so many of us.

“We’re urging as many people as possible to join us for the film premiere on Thursday – and, of course, to vote for Crewe to become the home of Great British Railways.”

The Heart of Rail film will premiered on YouTube on 4th August.

It will also be shared throughout the town as part of Crewe’s Big Great British Railways Weekend kicking off this Saturday (6 August).

Mark Beavan, film participant and chairman of the Railwaymen Supporters Society, said: “Rail really is at the heart of Crewe – it’s in our DNA.

“The town wouldn’t exist without the railways, and neither would the football club. Bringing Great British Railways to Crewe would cement our tradition as a railway town – but, critically, it would also kickstart the next chapter of our rail story, creating opportunities and prosperity just like it did when rail first came here.

“I’m proud to have taken part in the documentary and put forward Crewe’s compelling case to becoming the home of the Great British Railways. I look forward to opening the popcorn and watching the film live with other bid backers on Thursday evening.”

You can vote for Crewe’s to become the home of Great British Railways here: