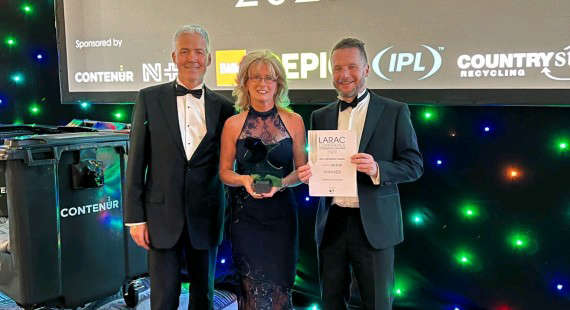 Cheshire East Council gained national recognition in the category of ‘Best Partnership’ at an awards evening in Birmingham on Wednesday night.

The Local Authority Recycling Advisory Committee award, is down to the outstanding work that has taken place on the Cleaner Crewe project – a scheme into its second year, which is dedicated to reinvigorating alleyways and streets in Crewe.

Cleaner Crewe is a true success story of collaborative working. It has seen Cheshire East colleagues collaborate with Crewe Town Council, (which has also supported with funding as well as personnel), Ansa and other organisations such as Cheshire College South & West, Men in Sheds, and the local police community support officer, not to mention residents who have embraced the work with real enthusiasm setting up working committees to help maintain the impetus of the project.

It has led to alleyways that were once blighted by fly-tipping and littering generally, to be places where people gather to celebrate newly created communities. Students from Cheshire College South & West even produced a mural over the summer to mark the Queen’s Jubilee – helping to foster the sense of civic pride in the project area.

Cheshire East Council was one of three local authorities up for the ‘Best Partnership Award’ on Wednesday.

Councillor Mick Warren chair of Cheshire East Council’s environment and communities committee, said: “This award win is testament to a phenomenal effort by a huge number of people across a number of disciplines.”

“Partnership working is something that is often referred to as a means of achieving success with community-focused projects. However, this one deserves a very special mention. The ‘Cleaner Crewe’ project team at Cheshire East has made long-lasting positive collaborations with so many people and organisations and importantly has consistently kept delivering positive results.

“These projects take an incredible amount of hard work and dedication to be successful and nights like these truly make it worthwhile. Well done everyone – it’s a fabulous achievement!”