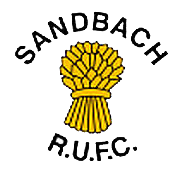 On Thursday Sandbach RUFC received the disappointing news that, following on from the recent tightening of Government restrictions, in a bid to control the spread of Covid-19, the Rugby Football Union (RFU) announced that with the exception of the Premiership, Championship and the women’s top tier of rugby, no organised RFU or non-RFU Leagues including merit tables, adult or age grade competitions, will be played before January 2021, at the earliest.

The RFU continues to be in active dialogue with the government, about moving to Stage E and should the community game reach this point at any time before Christmas, competitive friendly matches could commence. However, this now also seems unlikely, with potential severe financial consequences for clubs and the possibility of some having to fold.

Sandbach being a well-run club are unlikely to be in this position, but nonetheless will need to manage their funds accordingly, with bar revenues, game sponsorship and match entrance fees clearly being reduced. There is fear that the knock-on effect could be massive for the game, with adult players potentially leaving to find another sport. Sandbach though, being very much a community-based club, with a strong record of growing players, at least have some comfort that the vast majority of their players and supporters are likely to remain loyal.

A good example of their development of players is Ewan Ashman, as earlier in the month they saw the 19-year-old make his Premiership debut for Sale Sharks, in their 31 v 40 win at Welford Road, against Leicester Tigers. Ewan came through the ranks at Sandbach starting his rugby in the Under 8’s and represented Cheshire and Scotland at various age group levels. The hooker made his debut for the Sandbach 1st XV, two years ago and they helped his development, with working with the Sandbach then Head Coach Rob Webber, the former England International being the Sale Sharks first choice hooker. Last season Ewan again excelled for Scotland, who he qualifies for through his father, when he was the top try scorer, in the Under 20’s Six Nations Tournament.

Sandbach despite the frustrating news, continue to work with the players and to utilise and organise non-contact rugby, using Ready4Rugby and other touch rugby activities. Also, where possible they are looking into arranging fixtures with other clubs, to play this format, which should help bring a degree of competition and variety. Sandbach recently held a very successful intra-club tournament, using this format, with four 10-man squads playing conditioned, Covid - 19 compliant games and supporters implementing social distancing rules. Touch rugby is not to everyone’s liking and though it undoubtably can help develop handling and footwork skills, it lacks the physicality, which makes the real game so special and a sport for all shapes and sizes. But until such time as competitive rugby returns, the club will soldier on.