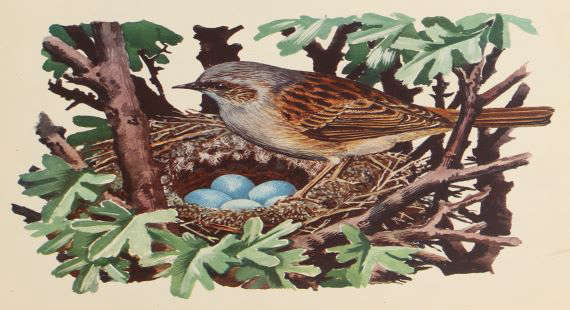 The Macclesfield Cultural Forum is continuing its series of ‘Inspired by Nature’ events in the winter months, to remember Macclesfield artist Charles Tunnicliffe, in what would have been his 120th year.

As part of the Cultural Forum, Cheshire East Council, Macclesfield Town Council, The Silk Museum, LIT festival, Macclesfield Library and Cheshire Archives and Local Studies have worked together to produce exhibitions, talks and creative workshops that explore Tunnicliffe’s passion for nature. The events have brought Tunnicliffe’s work up to date with a virtual reality trail, a flora and fauna light trail across the town centre and a schools’ competition.

Born in Macclesfield in December 1901, Charles Tunnicliffe remains one of Britain’s most popular artists of the natural world. Described as a ‘countryman, through and through’, his work reflects his love of nature and the inspiration of his Macclesfield farming background.

Tunnicliffe trained at Macclesfield School of Art before winning a scholarship to the Royal College of Art, London. He was elected to the Royal Academy in 1944. His beautiful artworks were recognised by Brooke Bond, which featured them as collectable cards within their tea, giving them wide coverage and renown. However, he is probably best known for his illustrations in the Henry Williamson novel ‘Tarka the Otter’.

Through to spring, Cheshire East Council will be co-ordinating a programme of creative events to celebrate the life and work of Charles Tunnicliffe, ’an English genius’. The ‘Inspired By Nature’ Tunnicliffe exhibition will continue at Macclesfield Town Hall until March, with Macclesfield Library hosting a free hour-long Tunnicliffe Town Centre Trail at 5.30pm on Wednesday 19 January.

On Saturday 19 February, you can drop into the library with your children for the council’s regular reading event ‘Storytime’, which will feature Tarka the Otter. This event is suitable for children aged 3-7.

A ‘Tarka trail’ – available to children of all ages – will also run throughout the half term from 19-26 February in the children's library. The ‘Life is Wild’ exhibition of the illustrations on Charles Tunnicliffe continues at Macclesfield Library until 28 February.

School assemblies will be celebrating Tunnicliffe’s work, while the Silk Museum will be running a competition for children aged 11 and under to draw an animal or some wildlife that they have seen in the real world. Entry forms are being distributed to schools over the coming week and are also available at Macclesfield Library. Competition entries need to be returned to the library or the museum by Monday 14 February and some entries will be shown at the library during the February half term.

Councillor Nick Mannion, chair of Cheshire East Council’s economy and growth committee, said: “It is good to keep this series of events, which we started in December, moving along in the new year. Charles Tunnicliffe’s paintings go right back to the early part of the 20th century but his work can still be a great inspiration to young people today aspiring to get involved in art themselves.

“These town-centre activities encourage people to familiarise themselves with the work of someone whose roots are very much in the local area and to explore their own creative potential.”

A permanent display of Tunnicliffe images will be installed at sites that relate to his work around Macclesfield town centre.

Here is a full itinerary of the planned activities.